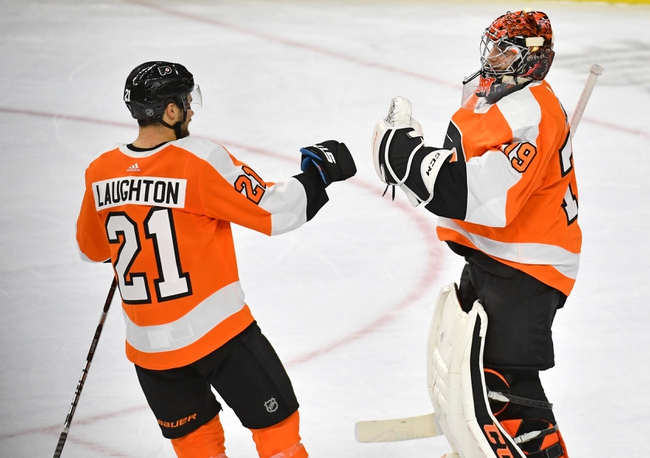 The Philadelphia Flyers and the New Jersey Devils meet in a Metropolitan division NHL clash from the Prudential Center on Friday night.

The Philadelphia Flyers will look to rebound from back-to-back losses after a 7-1 beatdown at the hands of the Pittsburgh Penguins in their last outing. Pittsburgh scored just before the six minute mark of the opening period and then pushed ahead 3-0 with a pair of goals :33 apart just before the midway point of the period. Pittsburgh scored another to give themselves a 4-0 lead after 20 minutes of play and scored another pair late in the 2nd :20 apart. Oskar Lindblom scored a consolation marker for the Flyers, but the Pens would add a 7th for good measure in the dying seconds of the game. Brian Elliott took the loss after allowing 6 goals on 28 shots faced before being pulled in the 2nd period.

The New Jersey Devils will look to rebound from back-to-back defeats after a 7-6 overtime loss to the Tampa Bay Lightning in their last outing. Kyle Palmieri opened the scoring on the power play for New Jersey just 1:10 into the game but the Bolts would tie the game and take a 2-1 lead after 20 minutes of play. Jesper Bratt tied the game early on in the 2nd but the Lightning would re-take the lead with just over eight minutes to go. Palmieri responded just :29 with his 2nd of the game and Bratt added his 2nd :59 after that to give Jersey a 4-3 lead heading to the 3rd. Sami Vatanen pushed the Devils 5-3 ahead, but Tampa Bay would pull one back just 1:32 later, tie the game five minutes after that, and take the lead with less than 4 minutes to go. Palmieri played hero temporarily, tying the game with his hat-trick goal with :08 remaining, but it was all for nothing as Tampa Bay scored early in overtime to take the win and send Jersey home with a single point for their efforts. Cory Schneider took the loss after allowing all 7 goals on 23 shots faced in the defeat.

Neither of these teams are ones I’m trying to get behind in their current form, as both have lost back-to-back games, giving up 12 goals each. Both teams have serious goaltending issues right now, and if you’ve been following me at all, you know how much I dislike both of these teams. Instead, I’m going to side with the over. Both teams pack some punch offensively, and when you factor in the goaltending that makes swiss cheese look solid, I think we hit on the over with relative ease in this one.