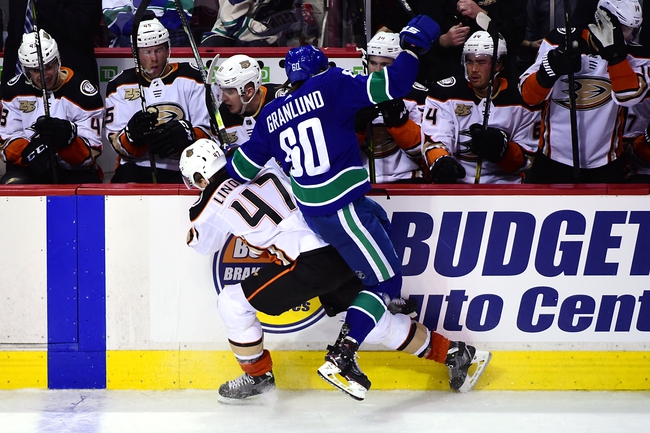 The Vancouver Canucks look to continue their strong start to the season as they face off against the Anaheim Ducks on Friday as both teams look for their 9th win of the season.

The Canucks head into Anaheim coming off a victory against the Los Angeles Kings and will be out for a repeat effort against a Ducks side who has cooled off a little bit lately but has been playing quite well so far this season. Vancouver has a handful of young superstars in the making but it would be an oversight to think they would be playing this well to kick off the year as new team captain Bo Horvat has his group believing and a road win against the Ducks would further add to that sentiment. Vancouver is 6-0 in their last 6 show downs against teams from the Western Conference and 4-1 in their last 5 games on the road and with Jakob Markstrom getting the call in the Vancouver crease he provides them with a more than capable shot at netting a road victory.

The Ducks meanwhile have been on an absolute tear at home this season as they are 8-1 in their last 9 games in Anaheim dating back to last season and are 5-1 in their first 6 games this season which accounts for why they are a favorite in this spot. The Ducks were expected by some to take a step back after it looked as though they were going to disintegrate their long standing core but so far they have looked strong and should be considered as such until proven otherwise. The Ducks are 5-1 in their last 6 games as a home favorite and with John Gibson getting the call in goal he provides the Ducks with a goaltending edge over Vancouver who will need to find a way to solve him in this spot.