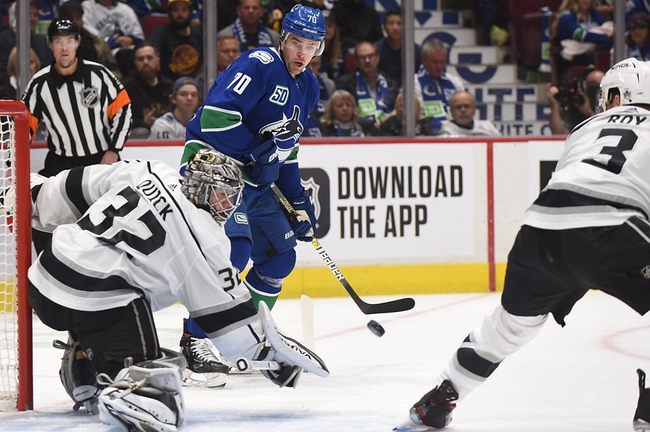 The Vancouver Canucks and the Los Angeles Kings meet in a Pacific division NHL clash from Staples Center on Wednesday night.

The Vancouver Canucks will look to build on a 7-2 win over the Florida Panthers in their last outing. Brandon Sutter opened the scoring for the Canucks just 1:14 into the game before Tim Schaller and Jake Virtanen each had a goal 1:53 apart to push ahead 3-0. Florida pulled a goal back, but Vancouver would respond just 1:26 later thanks to J.T. Miller and push ahead 5-1 in the final minute of the opening period. Florida made it 5-2 just after the midway point of the 2nd before Miller scored his 2nd goal of the game in the final minute of the 2nd period. Brock Boeser added a 7th goal for the Canucks to add insult to injury and drive a nail in Florida’s proverbial coffin. Thatcher Demko got the win to improve to 3-1-0 after stopping 29 of 31 shots faced in the winning effort.

The Los Angeles Kings will be out to snap a three game losing streak after a 5-1 loss to Chicago in their last outing. Chicago opened the scoring 2:33 into the game before doubling the lead almost at the same point in the 2nd period. The Blackhawks forged 4-0 ahead by the end of the 2nd period before Scott Walker finally got the Kings on the board 3:35 into the 3rd period. It was all for naught though as Chicago put in a 5th goal with just over two minutes to go to secure the win and send Los Angeles home empty-handed. Jack Campbell ended up with the loss, falling to 2-3-0 after allowing all 5 goals on 26 shots faced in the losing effort.

This line feels fishy to me, as Vancouver’s trending in the right direction and Los Angeles isn’t. But hey, fishy line or not, I’m going to jump on Vancouver here. The Canucks aren’t as explosive on the road as they are at home, but they’ve won four of the last five meetings in L.A. and that doesn’t help the Kings who have had issues keeping the puck out of the net all season long, including their last three games where the Kings have been outscored 15-4, giving up five goals in each game. I just like Vancouver a whole lot more than I do Los Angeles here, so I’ll take the low line with the Canucks on the road in this one.