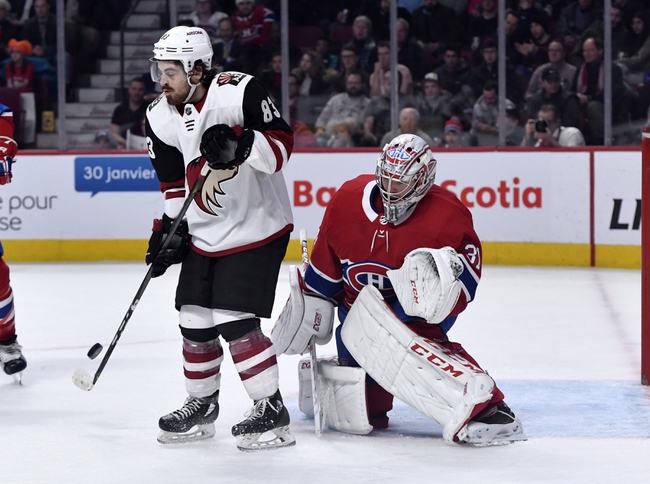 Where to watch: TSN2, FS-Arizona+ Stream live sports and exclusive originals on ESPN+. Sign up now!

The Montreal Canadiens and the Arizona Coyotes meet in NHL action from Gila River Arena on Wednesday night.

The Montreal Canadiens will look to pick up a big road win to build on their 5-2 win over Toronto in their last outing. Brendan Gallagher opened the scoring for the Habs and Jonathan Drouin doubled the lead less than five minutes later. Toronto pulled a goal back in the final seconds of the opening frame and tied the game with the lone goal of the 2nd period. Joel Armia didn’t wait to break the tie, scoring :07 into the 3rd to give Montreal the lead for good. Drouin added a 4th for Montreal with his 2nd of the game followed by a 5th goal from Nick Suzuki with just over eight minutes to go. Carey Price got the win to improve to 5-3-1 on the year after stopping 29 of 31 shots faced in the winning effort.

The Arizona Coyotes will look to build on back-to-back wins, victories in 6 of 7 and 7 of their last 9 games after a 3-2 shootout win over Buffalo in their last outing. Buffalo jumped out to an early 2-0 lead just after the midway point of the opening frame before Conor Garland pulled a goal back with just over a minute to go in the 1st. Carl Soderberg tied the game at two late in the 2nd on the power play. The 3rd period couldn’t get us a winner, and neither could overtime, so it was off to the shootout where Nick Schmaltz scored the lone goal in 5 shooters to give the Coyotes the win and the extra point. Darcy Kuemper got the win to improve to 5-3-0 on the year after stopping 24 of 26 shots faced in regulation and overtime as well as all three shots faced in the shootout.

Montreal is 8-3 in the last 11 meetings between these two teams in Arizona and 16-6-2 in the last 24 meetings overall while Arizona is 7-2 in their last 9 games overall.

The Canadiens are coming off of a solid win against Toronto, but that doesn’t change the fact that Montreal has had issues with consistency out of the gate this season. Arizona continues to be one of the pleasant surprises in the early going, as the wins keep coming and the defense and goaltending has been unreal, giving up two goals or less in 8 of their 11 games so far this season. This could be the year that the Coyotes deliver on some of their expectations and compete come playoff time but that’s a long way away. For now, I’ll ride the hot hand and side with Arizona and the low line.