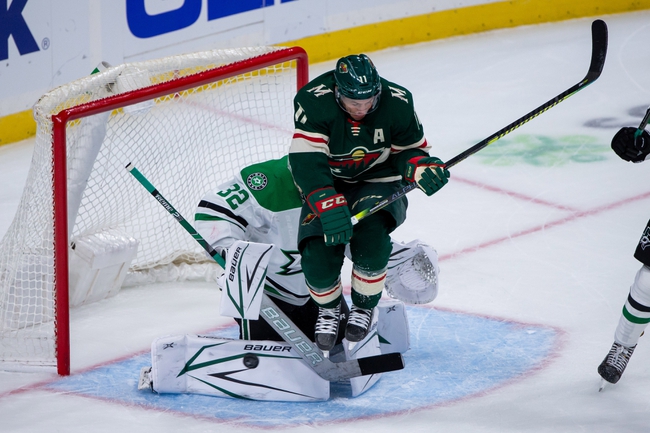 Where to watch: FS-West+, FS-North Stream live sports and exclusive originals on ESPN+. Sign up now!

The Minnesota Wild and the Dallas Stars meet in NHL action from the American Airlines Center on Tuesday night.

The Minnesota Wild will be looking to build on a 5-1 win over the Los Angeles Kings in their last outing. Gerald Mayhew opened the scoring for Minnesota with the lone goal of the opening frame before Los Angeles tied things up early in the 2nd. Erik Staal re-took the lead for the Wild after 40 minutes of play before Joel Eriksson Ek, Mikko Koivu and Jared Spurgeon each scored in the 3rd to push the Wild ahead 5-1 and secure the victory. Alex Stalock got the win to improve to 2-2-0 on the year after stopping 30 of 31 shots faced in the winning effort.

The Dallas Stars will look to rebound after a 3-0 loss to the Pittsburgh Penguins in their last outing. The game was scoreless through the opening and second periods before Pittsburgh broke things open in the 3rd with a pair of goals 1:38 apart before adding a third goal on an empty net to seal the win and send the Stars back empty-handed. Denis Gurianov led Dallas with 4 shots on goal while Alex Radulov came right behind with 3 shots on goal in the losing effort. Ben Bishop ended up with the loss to fall to 3-5-1 on the year after allowing 2 goals on 26 shots faced in the losing effort.

I’d like to take a shot with Minnesota and the plus money, but the issue is that the Wild, despite winning three of their last four games, have been atrocious on the road this season, going 1-6 and being outscored 26-10 while scoring no more than two goals in any of their seven road games this season. Dallas fell to Pittsburgh last time out, but the Stars hung in there with Pittsburgh before things started to fall apart in the 3rd. I think Dallas is more likely to get the job done here, so I’ll side with the Stars here.