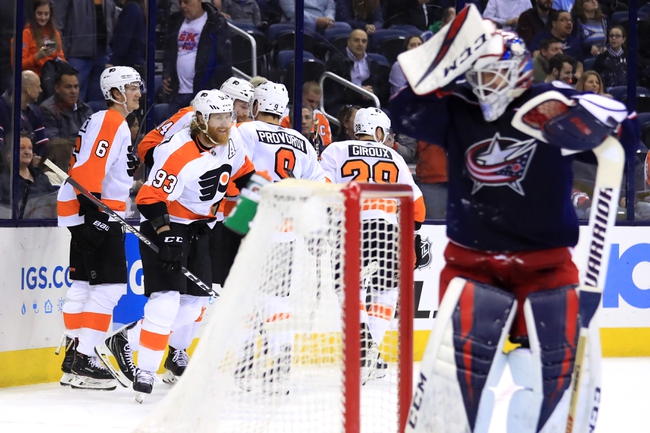 The Philadelphia Flyers look to stay hot on home ice as they welcome the Columbus Blue Jackets to town on Saturday.

The Jackets head into Philadelphia looking to win their third game in a row but will be in tough against a Flyers side who is 3-1 on home ice and is in the midst of a 2-game winning streak as well. Columbus suffered some serious blows in the offseason when they lost some key pieces from their roster including Sergei Bobrovsky, Artemi Panarin, and Matt Duchene but head coach John Tortorella has them playing well to start the season and they could very well get back in the playoffs without that group of guys this season. Columbus is 4-0 in their last 4 games against Eastern Conference opponents and are 10-4 in their last 14 games on the road which makes them a very interesting play here against a Flyers side who is playing well but perhaps is a little overrated in this spot.

Philly has a pretty decent roster and have put their faith in youngster Carter Hart between the pipes, and as most hockey fans know, goaltending for the Flyers is one of the toughest jobs in the NHL. The Flyers 13-5 in their last 18 games as a favorite but are just 2-5 in their last 7 games following a win so consistency will be something that Flyers brass and fans will be looking for out of their group this season if they are going to compete for a playoff spot in the Metro division. The Flyers have struggled against division rivals dating back to last season as they are just 1-5 in their last 6 meetings and are winless in their last 5 Saturday games where the lights seem to shine brightest on the NHL schedule.

The Jackets are 4-0 in their last 4 games as an underdog and have hit the Over in their last 4 as an underdog while the Flyers have hit the Over in 9 of their last 11 Saturday games but Under in 5 of their last 7. This one is tough to call as the Jackets are getting great value but can’t trust this roster at the moment with all of the subtractions they have had. Play to the over as both teams can score while both goaltenders are still getting their feet wet as a starter.