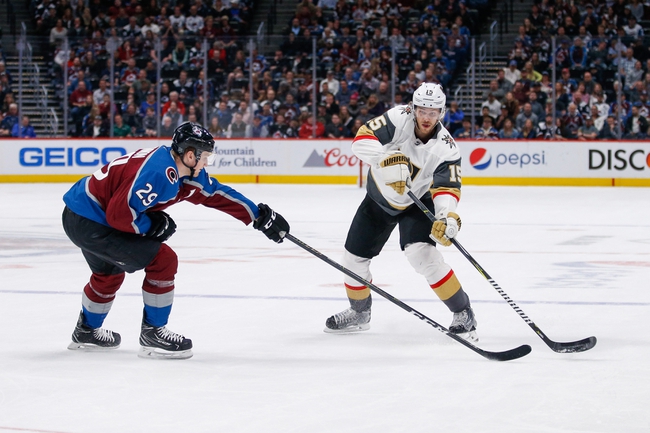 Where to watch: ATT-RM, Alt2 Stream live sports and exclusive originals on ESPN+. Sign up now!

The Colorado Avalanche and the Vegas Golden Knights meet in NHL action from the T-Mobile Arena on Friday night.

The Colorado Avalanche will look to rebound from their first regulation loss of the season after a 3-1 defeat at the hands of St. Louis last time out. St. Louis opened the scoring just after the midway point of the opening period before Nathan MacKinnon tied the game for the Avs with a power play goal of their own just 2:31 later. St. Louis pulled ahead 3-1 after 40 minutes of play with a pair of goals in the 2nd period and the Avalanche couldn’t find a winner in the 3rd, despite outshooting the Blues in the final period. Colorado was outshot 25-18 in the losing effort. Philipp Grubauer ended up with the loss after allowing all 3 goals on 25 shots faced in the losing effort to fall to 5-1-1 on the year.

The Vegas Golden Knights will look to build on a 2-1 shootout win over Chicago in their last outing. Chicago scored late in the opening period and would hold on to the 1-0 lead through the rest of the 1st, the entire 2nd period and most of the 3rd before Nick Holden tied the game at one with 1:33 to go, sending us to some free hockey. Overtime didn’t solve anything, so it was off to the shootout where Chicago scored their first attempt but missed the next two while Jonathan Marchessault and Shea Theodore each had a shootout goal to secure the win and the extra point for the Golden Knights in the win. Marc-Andre Fleury got the win to improve to 7-2-0 on the year after stopping 31 of 32 shots faced in regulation and overtime as well as 2 of 3 shots faced in the shootout.

Colorado and plus money is tempting, but the Avs are coming off of their first regulation loss of the season and you have to imagine that Colorado is ready for this six game road trip to be over. Vegas has been up and down, but the Golden Knights are a better team at home and I think given the reasonable line, I’d lay the juice with Vegas in this one, especially with all of the success the home team has had in this matchup.