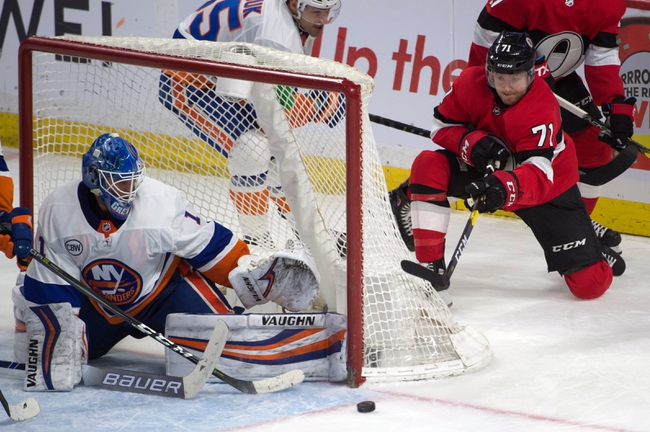 The New York Islanders and the Ottawa Senators meet in NHL action from the Canadian Tire Centre on Friday night.

The New York Islanders will look to add to their current 6-game winning streak after picking up a 4-2 win over Arizona last time out. Derick Brassard opened the scoring for the Isles just 1:25 into the game before Arizona tied the game just after the midway point of the opening frame. Josh Bailey gave the Islanders a 2-1 lead with the only goal of the 2nd period before Anders Lee put the Isles 3-1 ahead eight minutes into the 3rd. Arizona pulled one back to make it 3-2, but that’s as close as it got as Scott Mayfield added an empty net goal to secure the win for the Isles. Semyon Varlamov got the win to improve to 3-2-0 on the year after stopping 21 of 23 shots faced in the win.

The Ottawa Senators will look to build on a 5-2 win over Detroit in their last outing. Chris Tierney opened the scoring with the lone goal of the opening period. Detroit pushed ahead 2-1 with a pair of goals over a span of 1:40 to start the 2nd before Mark Borowiecki tied the game at two just :50 later. Jean-Gabriel Pageau gave the Sens the lead again just 2:12 later and Anthony Duclair made it 4-2 later on in the middle frame. Duclair iced the game for Ottawa with an empty net goal late in the 3rd to secure the win. Anders Nilsson got the win to improve to 1-2-1 on the year after stopping 34 of 36 shots faced in the winning effort.

This line feels a bit odd, but even so, I’m not passing on this price with the Isles here. Even on a back-to-back, the Islanders are the better team playing much better hockey than Ottawa right now and the Senators are just not a team I’m looking to back in any form, right or wrong. I just think that the Islanders are in a good position to keep their winning streak alive here, so I’ll lay the cheap price with New York in this one.