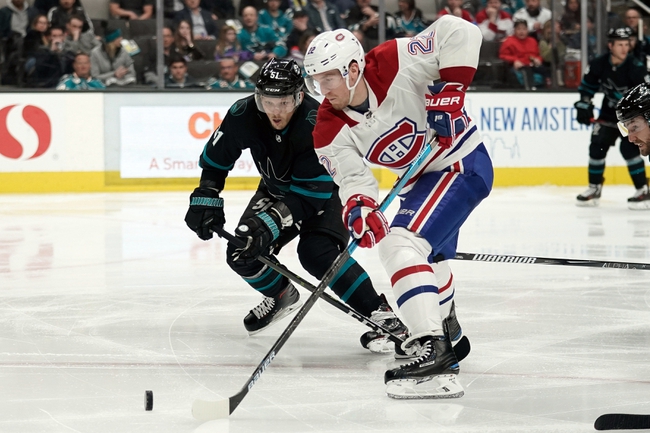 The San Jose Sharks and the Montreal Canadiens meet in inter-conference NHL action from the Bell Centre on Thursday night.

The San Jose Sharks will look to rebound from back-to-back losses after a 4-3 defeat at the hands of Buffalo in their last outing. Dylan Gambrell opened the scoring for the Sharks early in the opening period before Marc-Edouard Vlasic doubled the lead late in the 1st. Buffalo would tie the game by the end of the 2nd and push ahead 3-2 within the first minute of the 3rd period. Erik Karlsson tied the game just after the midway point of the 3rd and the game would remain tied at three at the end of regulation, sending us to some free hockey. Buffalo would find the winner 3:13 into the extra frame to secure the win and send San Jose back with just a single point to show for their hard work. Martin Jones ended up with the loss, falling to 2-4-1 on the year after allowing all 4 goals on 29 shots faced in the losing effort.

The Montreal Canadiens will look to bounce back after a 4-3 loss to the Minnesota Wild in their last outing. Minnesota opened the scoring with the lone goal of the opening period before Tomas Tatar and Phillip Danault scored :16 apart to give the Habs a 2-1 lead early in the 2nd, Minnesota would tie the game with :15 to go in the 3rd, sending us to the final period deadlocked at two. Danault would give Montreal the lead early in the 3rd before Minnesota tied  the game about five minutes later before taking the lead for good about four minutes after that. Keith Kinkaid ended up with the loss after allowing all 4 goals on 33 shots faced to drop to 0-1-1 in the losing effort.

I've had to go back and forth on this game a little bit, and after some careful consideration, I'm going to side with the over here. San Jose still isn't a great team on the raod despite picking up 3 of 4 points in their last couple of road games, but Martin Jones has scuffled, giving up four goals in all three of his road starts and in five of his seven starts this season, while Carey Price, despite being the slightly more reliable starter has just two career wins against the Sharks in his career, including allowing 11 combined goals in his last three home starts against the Sharks. Both teams are capable of putting up some goals, so I'll back the over here.