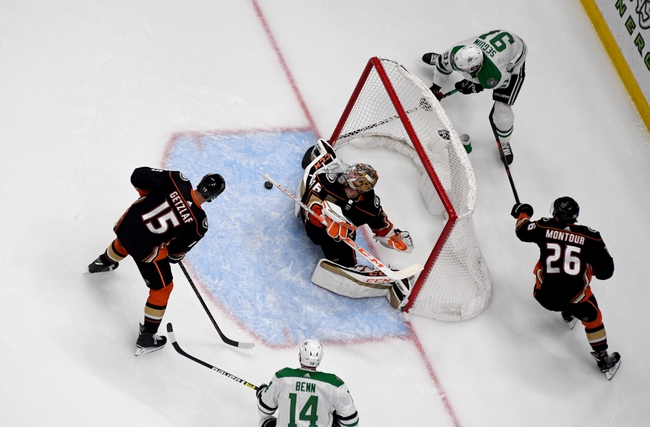 The Anaheim Ducks and the Dallas Stars meet in NHL action from the American Airlines Center on Thursday night.

The Anaheim Ducks will look to rebound from back-to-back losses after a 6-1 defeat at the hands of Nashville in their last outing. Nashville jumped out to a 2-0 lead after 20 minutes of play with a pair of goals less than five minutes apart and made it 3-0 within the first minute of the 2nd period and 4-0 after the midway point of the 2nd. Ryan Getzlaf finally got the Ducks on the board at the four minute mark of the 3rd period, but it was short-lived as the Preds responded just :31 later to push ahead 5-1. The Predators added onre more for good measure and rode out that 6-1 score line to the finish. John Gibson took the loss, falling to 4-4-0 on the year after allowing 4 goals on 19 shots before being pulled in the 2nd period.

The Dallas Stars will be out to build on back-to-back wins after a 2-1 win over Ottawa last time out. Radek Faksa opened the scoring for Dallas late in the opening frame with the only goal of the period before Joe Pavelski doubled Dallas’ lead just after the midway point of the 2nd period on the power play. The 2-0 advantage would hold up through the 2nd and most of the 3rd before Ottawa pulled a goal back late, but it wasn’t enough as Dallas held on for the victory. Anton Khudobin got the win to improve to 1-3-0 after stopping 19 of 20 shots faced in the winning effort.

I’d like to think that Anaheim can bounce back here as they’ve played better hockey up to this point, but the Ducks in their last couple of games have showed some signs of regression, regression to the team many expected to see coming into the season, and that’s not a good thing. Dallas may have only beaten the lowly Senators in their last outing, but they also took down Philadelphia on the road and have some confidence brewing and I think that can continue here. Gibson hasn’t had much luck in Dallas, in the 4 starts since the 2016 season Gibson’s given up 18 combined goals. I think this is a game that Dallas can use to catapult into some major momentum, so I’ll lay the juice with Dallas here.