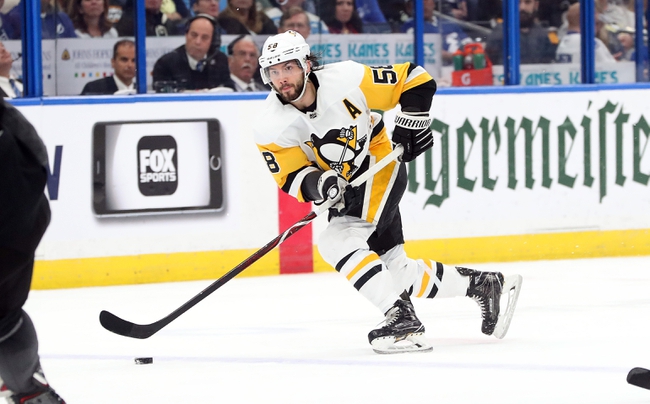 Where to Watch: NBC Sports Stream live sports and exclusive originals on ESPN+. Sign up now!

The Pittsburgh Penguins and the Tampa Bay Lightning meet in NHL action from the Amalie Arena on Wednesday night.

The Pittsburgh Penguins will look to rebound after back-to-back defeats following a 4-2 loss to the Florida Panthers in their last outing. The Game was scoreless through the opening 20 minutes and for the first half of the 2nd period before Florida broke the deadlock with just over nine minutes to go in the 2nd. Teddy Blueger got the Pens on the board just 1:03 later to tie the game but Florida would retake the lead with two minutes to go in the middle frame. Florida pushed ahead 3-1 with just over six minutes to go but Patric Hornqvist would make things interesting, cutting it to 3-2 just :43 later. That’s as close as Pittsburgh got though as Florida added an empty net goal to close things out and send Pittsburgh back empty-handed. Matt Murray ended up with the loss, falling to 5-3-0 on the year after allowing 3 goals on 21 shots faced in the losing effort.

The Tampa Bay Lightning will look to rebound as well after being thumped by the Colorado Avalanche at home last time out, falling by a final count of 6-2. Coloardo opened the scoring just over three minutes into the game before Yanni Gourde tied the game in the later stages of the opening frame. Colorado would push ahead 4-1 early on in the 2nd with three goals in a span of 2:49 before making it 5-1 early in the 3rd. Victor Hedman pulled a consolation goal back for the Bolts just after the midway point of the 3rd period, but that’s as close as Tampa Bay got as Colorado responded less than three minutes later to push the lead to the final score line of 6-2. Andrei Vasilevskiy ended up with the loss, falling to 4-2-0 after allowing all six goals on 24 shots faced in the losing effort.

The plus money is always tempting with the Penguins whenever you get it, but this is just a bad schedule spot for Pittsburgh as it’s on the end of a back-to-back and I’m just not confident with Tristan Jarry between the pipes against a Lightning team that’s had a couple days to stew on their beating at the hands of Colorado last time out. The price tag isn’t pretty, but I’ll lay the juice with Tampa Bay and maybe take the Bolts to win in regulation to bring down the price tag a bit.