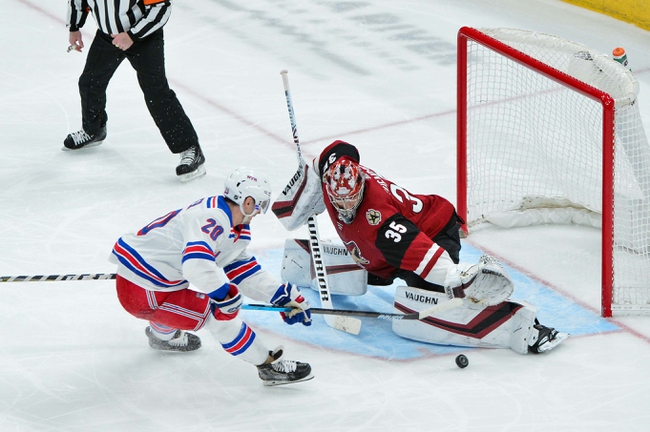 Where to Watch: FS-Arizona, MSG Stream live sports and exclusive originals on ESPN+. Sign up now!

The Arizona Coyotes and the New York Rangers meet in NHL action from Madison Square Garden on Tuesday night.

The Arizona Coyotes will look to build on three straight wins after a 5-2 win over Ottawa at home in their last outing. Kyle Capoblanco and Oliver Ekman-Larsson staked the Coyotes an early 2-0 lead with a pair of goals 1:23 apart, carrying the 2-0 lead to the 2nd. Conor Garland pushed Arizona 3-0 ahead with the only goal of the 2nd and Carl Soderberg gave the ‘Yotes a 4th just 1:18 into the 3rd on the power play. Ottawa pulled a pair of goals back 1:10 apart in the 3rd to make it 4-2 but that’s as close as Ottawa got as Lawson Crouse added an empty-netter to secure the win. Antti Raanta got the win to improve to 1-0-1 after stopping 34 of 36 shots faced in the victory.

The New York Rangers will be out to snap a four game losing streak after a 3-2 loss to Vancouver in their last outing. New York quickly fell behind 3-0 with the Canucks burying a trio of goals in the opening 20 minutes. Jesper Fast cut into the lead with the lone goal of the 2nd period and Artemi Panarin pulled the Rangers even closer 5:31 into the 3rd. That’s as close as New York got as the Canucks would shut the door the rest of the way to pick up the win. Henrik Lundqvist ended up with the loss after allowing 3 goals on 43 shots faced in the losing effort to fall to 1-3-0 on the year.

I've gone back and forth on this game, as the Rangers have owned the Coyotes overall and on the road, and the Rangers desperately need a win to break out of this slump. However, a lot of those wins came when Arizona was a joke in the NHL, and there were always rumors about the team relocating and when are they ever going to improve or are they ever going to improve. I think this year's Arizona team is for real and can be a legitimate dark horse to make the playoffs this year. The Coyotes haven't allowed more than three goals in a game this season and gave up three just once, while New York have been outscored 17-7 during this four game losing streak, not scoring more than two goals in any of those games. I just think that Arizona is trending in the right direction while the same can't be said about the Rangers so I'll lay the low line with Arizona in this game.