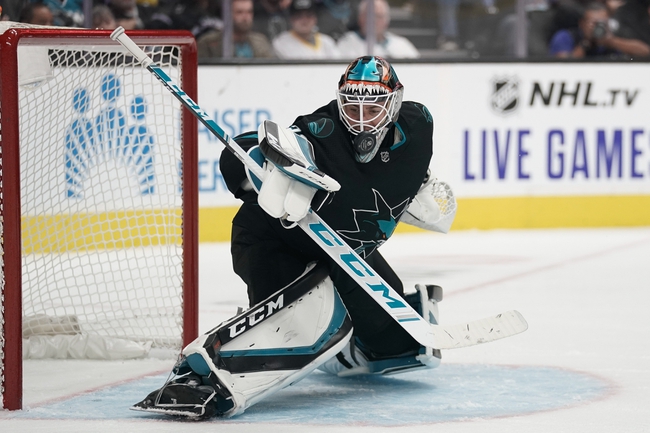 Where to Watch: MSG-Buffalo, NBCS-California Stream live sports and exclusive originals on ESPN+. Sign up now!

The San Jose Sharks and the Buffalo Sabres meet in the second half of a home-and-home set in NHL action from KeyBank Center on Tuesday night.

The San Jose Sharks come into this game looking for a key inter-conference road win while Buffalo is looking to maintain their hot start after improving to 7-1-1 on the year with a 4-3 Sabres win over the Sharks last time out. Marcus Johansson opened the scoring for the Sabres just after the midway point of the opening period before Timo Meier tied the game for San Jose just 3:50 later. Buffalo re-took the lead with the lone goal of the 2nd period thanks to Casey Mittelstadt.

The two sides traded goals with San Jose tying the game :44 into the 3rd thanks to a goal from Tomas Hertl before Buffalo re-took the lead 1:44 later thanks to Jeff Skinner. The Sharks tied the game again thanks to a goal from Marcus Sorensen just :28 after that to tie the game at three. Zemgus Girgensons broke the deadlock just after the midway point of the 3rd to give Buffalo a 4-3 lead that they’d ride the rest of the way to get the victory.

Linus Ullmark got the win between the pipes for Buffalo, improving to 2-1-1 on the year after stopping 29 of 32 shots faced in the win while Martin Jones ended up with the loss for San Jose, falling to 2-4-0 on the year after allowing four goals on 35 shots in defeat.

I fully understand that it’s hard to beat the same team in a matter of a couple of days in the professional leagues. However, I’m not sure why this line is as low as it is. San Jose has not been as good on the road as they’ve been at home, while the Sabres are red hot out of the gate and have collected 4 wins in 4 tries at home this season. Unless there’s something I don’t know, I think you have to take Buffalo at home here until the Sabres give us reason not to side with them, especially with this kind of price tag.