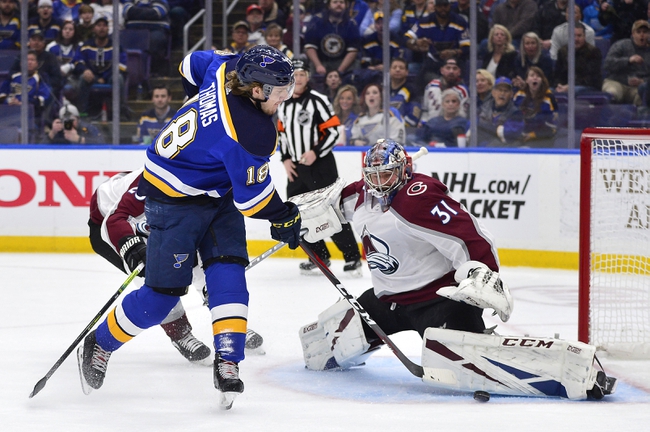 Where to Watch: FS-Midwest, Altitude Stream live sports and exclusive originals on ESPN+. Sign up now!

The Colorado Avalanche and the St. Louis Blues meet in NHL action from the Enterprise Center on Monday night.

The Colorado Avalanche will look to keep their point streak alive to start the season after improving to 7-0-1 with a 6-2 win over Tampa Bay last time out. Tyson Jost opened the scoring for the Avs just 3:09 into the game before Tampa Bay tied the game up in the later stages of the opening period. Jost scored his 2nd of the game 3:17 into the 2nd before Gabriel Landeskog buried and Jost completed his hat trick just :18 apart to push Colorado ahead 4-1. The lead would hold through the 2nd before Nazem Kadri pushed Colorado 5-1 ahead early in the 3rd. Tampa Bay made it 5-2 but the Avs quickly responded thanks to Mikko Rantanen to give us the 6-2 final score line. Pavel Francouz got the win to improve to 2-0-0 on the year after stopping 44 of 46 shots faced in the winning effort.

The St. Louis Blues will be out to snap a 4 game losing streak after a 5-2 loss to Montreal at home in their last outing. Montreal opened the scoring 5:57 into the game before Jaden Schwartz tied the game 1:11 later. Montreal re-took the lead just :05 into the 2nd period and added another goal 3:34 later. The Habs pushed 4-1 ahead later in the 2nd to take the lead into the 3rd. The 4-1 score held up through most of the 3rd before David Perron pulled one back to make it 4-2 in the final minute, but that’s as close as the Blues got as Montreal added an empty net goal :15 later. Jake Allen ended up with the loss, falling to 1-1-0 on the year after allowing 4 goals on 24 shots faced in the losing effort.

Colorado hasn’t had much luck against the Blues over the years, but this is the best Colorado team in quite some time, and the Avs just keep finding ways to get the job done. St. Louis is the defending Stanley Cup champion, but the Blues are off to another slow start to the season coming into this one with 4 straight losses and the simple truth is we’re getting plus money with a red hot Avalanche team against a Blues team that’s struggled over the last week. Sometimes you just have to ride the hot hand until the tickets stop cashing and getting plus money doesn’t hurt either so give me Colorado here.