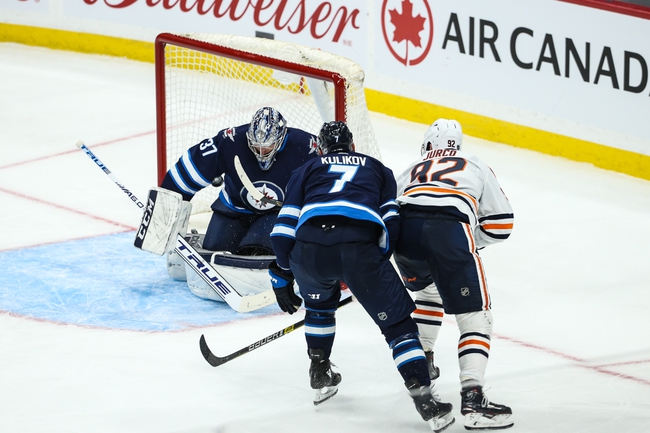 Where to Watch: SN1 Stream live sports and exclusive originals on ESPN+. Sign up now!

The Edmonton Oilers and the Winnipeg Jets meet in NHL action from Bell MTS Place on Sunday.

The Edmonton Oilers will look to build on their strong 7-1-0 start to the year after a 2-1 win over Detroit last time out. The game was scoreless through the opening 20 minutes before James Neal opened the scoring early in the middle frame and Ethan Bear doubled the lead later on in the period. Detroit pulled one back, but it was as close as the Red Wings got the rest of the way as Edmonton would hold on through the 3rd for the win. Mikko Koskinen got the win between the pipes to improve to 4-0-0 on the year after stopping 25 of 26 shots faced in the winning effort.

The Winnipeg Jets will look to bounce back and snap a three-game losing streak after a 3-1 loss to the Islanders in their last time out. Nikolaj Ehlers opened the scoring for the Jets with the lone goal of the opening period before New York tied the game and took the lead with a pair of goals in the 2nd period. The Jets tried to find an equalizer, but Winnipeg couldn’t find a tying goal before the Isles added an empty net goal to secure the win and send Winnipeg back empty-handed. Connor Hellebuyck ended up with the loss, falling to 3-3-0 after allowing two goals on 25 shots in the losing effort.

I get Winnipeg being favored at home because the Jets have historically been a strong team at home since going back to Winnipeg a few years ago as well as their recent success against Edmonton. However, this is the best Oilers team we’ve seen in quite a while, and the Jets haven’t been winning games at home like we’re used to seeing. Bottom line is, we’re getting the team in much better form with plus money in Edmonton, and I’m not going to pass it up here, especially with Winnipeg’s form on the other side so I’ll take the Jets and the plus money here.