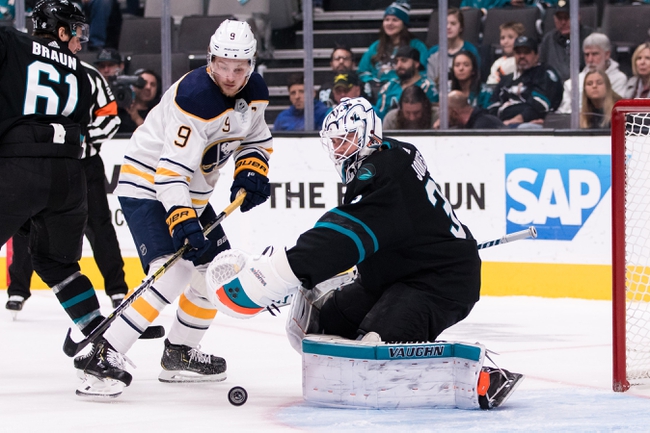 Where to watch: MSG-Buffalo, NBCS-California Stream live sports and exclusive originals on ESPN+. Sign up now!

The Buffalo Sabres and the San Jose Sharks meet in NHL action from the SAP Center on Saturday night.

The Buffalo Sabres will look to build on a 3-0 win over the Los Angeles Kings in their last outing. Casey Mittelstadt opened the scoring just 2:36 into the game before Conor Sheary doubled the advantage just 2:44 later, pushing the Sabres ahead 2-0 after 20 minutes of play. Mittelstadt scored his 2nd of the game early in the 2nd on the power play to give the Sabres the 3-0 lead that they’d ride out until the very end. Carter Hutton got the win to improve to 5-0-0 on the year after stopping all 47 shots faced for his 2nd shutout of the season.

The San Jose Sharks will look to build on their current three game winning streak after picking up a 5-2 win over Carolina in their last outing. Evander Kane opened the scoring just before the midway point of the opening period. Carolina tied the game just over two minutes later before Kane scored a pair of power play goals 2L24 apart to complete the rare 1st period hat trick and give San Jose a 3-1 lead heading to the 2nd. Barclay Goodrow pushed the lead up to 4-1 with the only goal of the 2nd period before Carolina pulled one back in the later stages of the 3rd period. That was as close as Carolina got though as Tomas Hertl iced the win with an empty net goal in the final minute of the 3rd. Martin Jones got the win to improve to 2-3-0 on the year after stopping 36 of 38 shots faced in the winning effort.

San Jose being favored makes sense as they’re at home and are on this little winning streak and are almost back to .500 while Buffalo’s been a profitable road fade for quite some time. However, Buffalo has been quietly playing some of the best hockey in the league over the first couple of weeks of the season and with this kind of plus money, right or wrong, I can’t pass up this kind of value with the Sabres in this one.