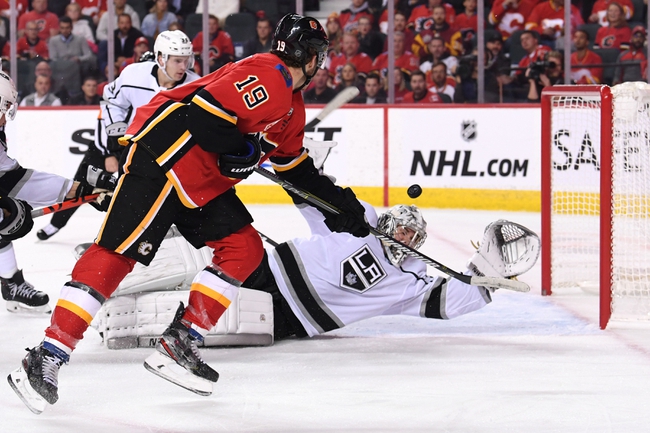 The Calgary Flames and the Los Angeles Kings meet in a Pacific division tilt from the Staples Center on Saturday night.

The Calgary Flames will look to build on back-to-back wins after a 5-1 beatdown of Detroit in their last outing. Andrew Mangiapane opened the scoring with the lone goal of the opening period before doubling that lead just before the midway point of the 2nd period thanks to a marker from Elias Lindholm. Detroit pulled a goal back just :28 later. Calgary broke the game open in the 3rd with goals from Sam Bennett, Derek Ryan and Mark Giordano as the Flames cruised to the finish line for the victory. David Rittich got the win to improve to 4-2-1 on the year after stopping 27 of 28 shots faced in the winning effort.

The Los Angeles Kings will be out to snap a three game losing skid after a 3-0 loss to the Buffalo Sabres in their last outing. Buffalo jumped out to a 2-0 lead within the first 5:20 of the game thanks to a pair of goals in 2:44. The Sabres added a 3rd goal in the 2nd period and that was all the Sabres needed despite the Kings peppering the Sabres goal with 47 shots on target, with none of those shots beating Sabres netminder Carter Hutton. Alex Iafallo and Jeff Carter led the Kings with 5 shots on goal each while Drew Doughty and Tyler Toffoli each had 4 shots on goal in the losing effort. Jack Campbell ended up with the loss, falling to 2-2-0 after allowing all 3 goals on 24 shots faced in the losing effort.

I’d like to give the Kings a shot as a home dog with the plus money, but the fact is that the Kings aren’t really doing much to give that plus money any value right now. The Kings either can’t keep the puck out of the net, or the odd time that the goaltending kind of shows up, the Kings can’t hang offensively, Rittich has been playing better giving up just one goal in back-to-back starts, and even if he doesn’t start here, I think the Flames are playing well enough to make it worth backing them here, so I’ll lay the juice with Calgary on the road in this spot.