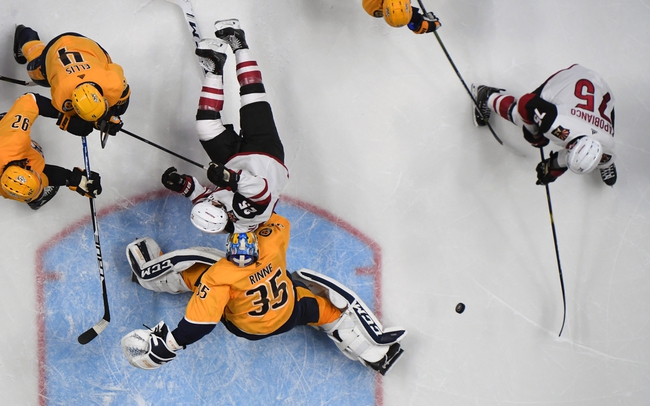 The Nashville Predators and the Arizona Coyotes meet in NHL action from the Gila River Arena on Thursday night.

The Nashville Predators will be looking to build on a solid 5-2 win over the Golden Knights in their last outing. Kyle Turris opened the scoring 2:14 into the game but Vegas would tie the game before the midway point of the period and take the lead late on in the opening period. Colton Sissons tied the game for the Preds in the opening minute of the 2nd before Calle Jarnkrok and Filip Forsberg scored 1:44 apart to push Nashville ahead 4-2. Nick Bonino added a 5th four minutes into the 3rd period to give the Predators a 5-2 lead that they’d ride to the final horn and to a big road victory. Pekka Rinne got the win to improve to 4-0-0 on the year after stopping 33 of 35 shots faced in the winning effort.

The Arizona Coyotes will look to build on a 4-2 win over the Winnipeg Jets in their last time out. Winnipeg opened the scoring but Conor Garland would tie the game in the dying second of the opening period. Christian Dvorak and Nick Schmaltz would score 2:10 apart early in the 2nd to take a 3-1 lead and Dvorak would bury his second of the game later in the 2nd. Winnipeg pulled one back early in the 3rd to make it 4-2, but that’s as close as Arizona got as the Coyotes would slam the door shut the rest of the way. Darcy Kuemper got the win to improve to 2-2-0 after stopping 38 of 40 shots faced in the win.

Getting a home dog like Arizona is tempting considering their recent success against the Coyotes and the ‘Yotes burned me against the Jets. But even with the victory, I’m still not buying what the Coyotes are selling this year. Nashville is the better team side by side and aren’t afraid of going on the road and getting the job done, just ask Vegas who is one of the better home teams in the NHL since their inception to the league a couple of years ago. I’ll lay the juice as I think Nashville gets the job done here.