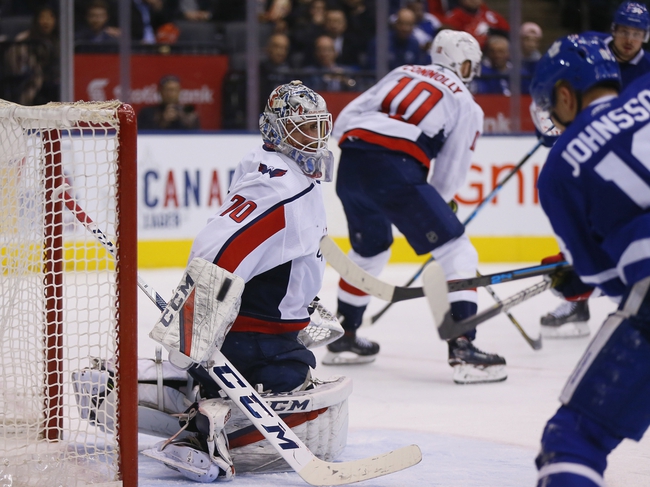 The Toronto Maple Leafs and the Washington Capitals meet in NHL action from the Capital One Arena on Wednesday night.

The Toronto Maple Leafs will look to build on back-to-back wins after a 4-2 win over Minnesota in their last outing. Minnesota opened the scoring with the lone goal of the opening period before John Tavares tied the game at one less than two  minutes into the 2nd period. Mitch Marner and Andreas Johnsson each scored a power play goal 1:12 apart to push Toronto ahead 3-1 before Auston Matthews scored later in the 2nd to go ahead 4-1. Minnesota found a consolation goal late, but it was too little too late as Toronto held on for the victory. Frederik Anderson got the win to improve to 4-2-0 after stopping 27 of 29 shots faced in the winning effort.

The Washington Capitals will look to bounce back from a 6-3 thrashing at the hands of Colorado at home last time out. Colorado was all over the Caps with four goals in a span of 5:43 before the midway point of the 1st period. Lars Eller and T.J. Oshie scored in the 2nd period to cut the deficit in half to 4-2 after 40 minutes of play, but Colorado would restore the three goal cushion early in the 3rd. Alex Ovechkin buried to cut the score down to 5-3, but that’s as close as Washington got as Colorado iced the win with an empty net goal late in the final frame. Ilya Samsonov ended up with the loss, falling to 2-1-0 after allowing a pair of goals on 21 shots in relief of Braden Holtby who gave up 3 goals on 3 shots in the start.

I get Washington being favored with Toronto coming to town on the second half of a back-to-back. However, Washington is still winless at home this season and I’m not overly thrilled about the goaltending prospects for the Capitals here. Holtby is coming in off of a start in which he gave up 3 goals on 3 shots and I haven’t seen enough of Samsonov to make a capable judgment here. Michael Hutchinson is a capable backup for the Leafs and I just think Toronto can do enough to steal one on the road so I’ll take Toronto and the plus money in this one.