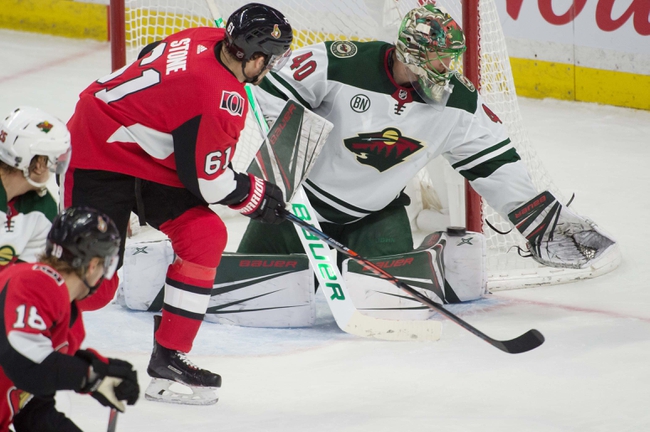 The Minnesota Wild and the Ottawa Senators meet in NHL action from the Canadian Tire Center on Monday.

The Minnesota Wild will be on the hunt for their first win of the season after losing 4 straight to start the season following a 7-4 loss to Pittsburgh last time out. Pittsburgh opened the scoring with the lone goal of the opening period and doubled their advantage 3:24 into the 2nd period. Jason Zucker responded just :28 later to make it 2-1 but the Pens would respond later in the 2nd with 3 goals in a span of 2:48. Jared Spurgeon got one back to make it 5-2 late in the 2nd but Pittsburgh would score another just after the midway point of the 3rd. Brad Hunt and Luke Kunin scored :21 apart to cut the deficit to 6-4, but that’s as close as the Wild got as Pittsburgh added an empty net goal to secure the win. Devan Dubnyk got the loss to fall to 0-4-0 after giving up 5 goals on 23 shots faced in the losing effort.

The Ottawa Senators will look to build on their first win of the season coming in the form of a 4-2 triumph over Tampa Bay last time out. The game was scoreless through the opening 20 minutes and through the first half of the 2nd period before Colin White broke the seal to give Ottawa the lead. A lead that lasted just :37 before Tampa tied the game up. Jean-Gabriel Pageau gave Ottawa a 2-1 lead heading into the 3rd. Tampa Bay would tie the game early on in the 3rd before Vladislav Namestnikov gave Ottawa the lead for good with a pair of goals 2:41 apart to give the Sens a much-needed win. Craig Anderson got the win to improve to 1-2-0 after stopping 19 of 21 shots faced in the winning effort.

I get that Minnesota’s had a lot of success in this matchup, mainly because Ottawa has been a joke in the NHL over the last couple of years. However, I’m not laying juice with Minnesota, especially on the road, when the Wild haven’t been able to keep the puck out of their net in the early going, giving up at least four goals in each of their first four games and at least five in three of those four  and I’ve said before, I just don’t see Devan Dubnyk as a viable starting goaltender in the NHL. Ottawa’s got some confidence after their win over Tampa Bay and the Senators have been competitive against Toronto and St. Louis as well early on so I’ll take Ottawa and the plus money here.