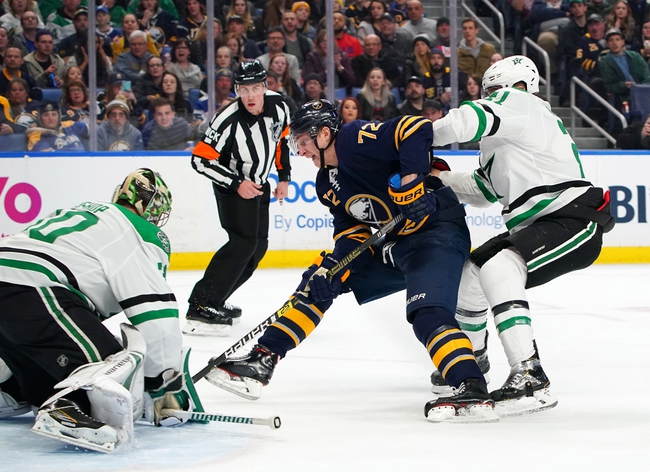 Where to Watch: FS-Southwest, MSG-Buffalo Stream live sports and exclusive originals on ESPN+. Sign up now!

The Dallas Stars and the Buffalo Sabres meet in NHL action from KeyBank Center on Monday.

The Dallas Stars will be out to rebound from back-to-back losses after a 4-1 defeat at the hands of the Washington Capitals in their last outing. Washington opened the scoring with the lone goal of the opening frame and doubled their cushion with the only goal of the 2nd period. The Caps forged ahead 3-0 before Radek Faksa pulled one back for Dallas in the losing effort. That was as close as Dallas got though as Washington added an empty-net goal to seal the deal at the final horn. Anton Khudobin took the loss, falling to 0-2-0 after allowing three goals on 24 shots faced in the losing effort.

The Buffalo Sabres will look to build on their strong start to the season, winning back-to-back games and improving to 4-0-1 on the year after a 3-2 shootout victory over Florida last time out. The game was scoreless through the opening 20 minutes and for the majority of the 2nd period before Johan Larsson opened the scoring with :31 to go in the middle period. Marco Scandella doubled the lead just over two minutes into the 3rd period, but Florida cut the deficit in half just over four minutes later and pulled out a tie in the dying seconds of the 3rd period to send us to free hockey. We went to a shootout where Jack Eichel and Casey Mittelstadt buried while Florida missed both of their attempts, giving Buffalo the win and the extra point. Linus Ullmark got the win to improve to 1-0-1 on the year after stopping 41 of 43 shots faced in the winning effort.

I get that Dallas is due for a win to get out from the slump that they’ve been going through in the early going and the Stars have had a decent amount of success in this matchup. However, once again, Buffalo is getting shown zero respect for the start that they’ve gotten off to this season. The Sabres keep finding ways to win and until they cool off, I think you have to keep riding Buffalo, especially with how Dallas has struggled to find footing so far this season