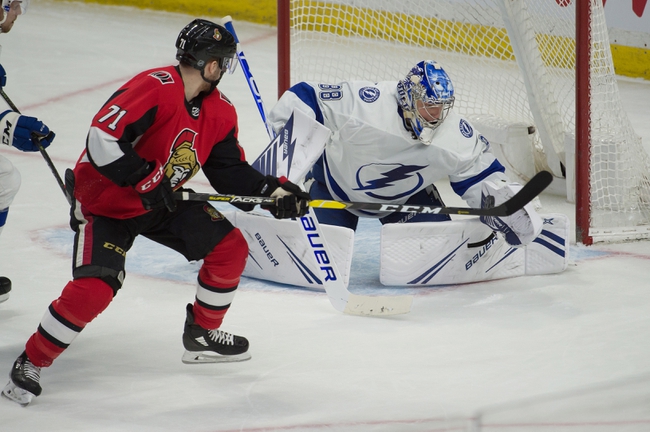 Where to watch: TSN5, SunSports Stream live sports and exclusive originals on ESPN+. Sign up now!

The Tampa Bay Lightning and the Ottawa Senators meet in an Atlantic division matchup in NHL action from the Canadian Tire Center on Saturday.

The Tampa Bay Lightning will look to build on their 7-3 beatdown of the Toronto Maple Leafs in their last outing. Brayden Point opened the scoring for the Bolts before Toronto stormed back 1:51 later, scoring a pair of goals in 3:27 to take a 2-1 lead. Nikita Kucherov and Kevin Shattenkirk responded by scoring 1:21 apart to give Tampa Bay a 3-2 lead, but Toronto would tie the game at three just before the end of the 1st period. Steven Stamkos scored with :43 left in the opening frame on the power play, giving Tampa Bay a 4-3 lead after just 20 minutes of play. Brayden Point extended the lead with the lone goal of the 2nd period and Ondrej Palat buried followed by Kucherov’s 2nd goal of the game to give the Bolts the 7-3 score line that would hold up until the final buzzer. Andrei Vasilevskiy got the win to improve to 2-1-0 on the year after stopping 25 of 28 shots faced in the winning effort.

The Ottawa Senators will be on the hunt for their first win of the season after a 6-4 loss to St. Louis dropped Ottawa to 0-3-0 this season. Vitaly Abramov and Artem Anisimov staked Ottawa an early 2-0 lead after 20 minutes of play before St. Louis finally got on the board early in the 2nd. The Blues would tie the game just 2:25 later before Chris Tierney re-took the lead for Ottawa heading into the 3rd. St. Louis tied the game at 3-3 just 1:38 into the 3rd and took the lead after the midway point before Anthony Duclair tied the game at four 1:25 later. St. Louis pulled ahead again just :42 later and iced the game with an empty net goal with just over a minute to go. Anders Nilsson ended up with the loss after allowing 5 goals on 36 shots faced in the losing effort.

I don’t know how ready I am to lay this kind of juice with Tampa Bay given their somewhat slow start to the season, but one thing’s for sure, the Bolts are the better option side by side against Ottawa here. The Senators are once again looking like a team that’s going to struggle more often than not this season while Tampa Bay got into a groove offensively against Toronto. I just like Tampa Bay and I don’t trust Ottawa as far as I can throw them, so I’ll side with the Lightning here and since this is a game the Lightning should win comfortably, I’ll side with Tampa Bay on the puck line to get rid of some of the juice.