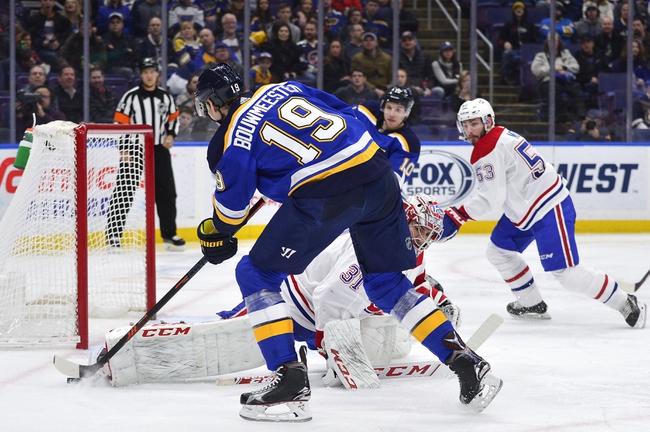 The St. Louis Blues and the Montreal Canadiens meet in NHL action from the Bell Centre on Saturday night.

The St. Louis Blues will look to keep their point streak going to start the season, improving to 3-0-1 with their third straight victory following a 6-4 win over Ottawa last time out. Ottawa jumped out to a 2-0 lead after 20 minutes of play before David Perron and Oskar Sundqvist scored 2:25 apart to tie the game at two. Ottawa re-took the lead late in the 2nd, so it was off to the 3rd where Jay Bouwmeester tied the game at three for the Blues. Brayden Schenn gave St. Louis a 4-3 lead that lasted just 1:25 before Ottawa tied the game at four. David Perron scored his 2nd of the game just :42 later and Ryan O’Reilly iced the victory with an empty net goal late in the period. Jake Allen got the win to improve to 1-0-0 after stopping 25 of 29 shots faced in the winning effort.

The Montreal Canadiens will be out to rebound from back-to-back defeats after a 4-2 loss to Detroit at home in their last outing. Detroit opened the scoring in the first before Joel Armia tied the game at one for the Habs but the Red Wings would re-take the lead just :30 later. Max Domi tied the game at two on the power play 4:34 into the 2nd period, before Detroit re-took the lead later on in the middle frame. Montreal tried to tie it up, outshooting Detroit 11-8 in the 3rd, but the Red Wings would close the door with an empty net goal late to secure the victory and send Montreal back empty-handed. Carey Price took the loss, falling to 1-1-1 on the year after allowing 3 goals on 33 shots faced in the defeat.

I’m kind of tempted to side with Montreal at home, but the issue I have is that the Canadiens aren’t playing consistently in the early going. St. Louis slipped against Washington in their season opener but have been playing lights out over the last week since then and getting the defending champions at this price, even on the road, given their current form is a steal so I’ll side with the Blues for another win here.