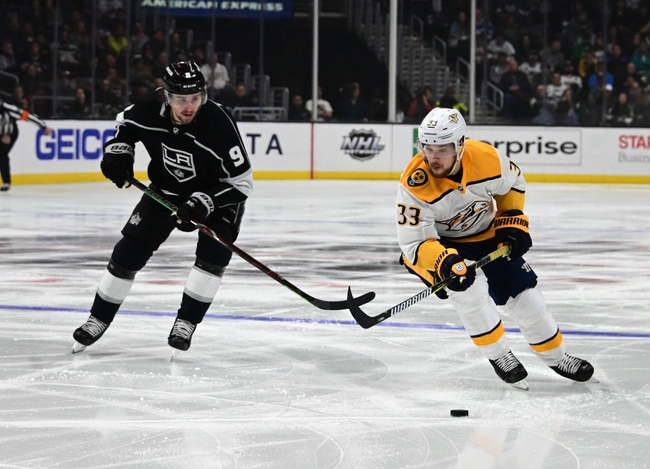 Where to watch: FS-West, FS-Tennessee Stream live sports and exclusive originals on ESPN+. Sign up now!

The Nashville Predators and the Los Angeles Kings meet in NHL action from Staples Center on Saturday night.

The Nashville Predators will look to build on back-to-back victories after rallying for a 6-5 win over Washington in their last outing. Washington opened the scoring just before the midway point of the opening period before Filip Forsberg tied the game just 1:22 later. Washington re-took the lead early in the 2nd before Ryan Johansen tied the game up at two just 2:51 later. The Caps scored a pair of goals 5:08 apart to make it 4-2 heading into the 3rd. Johansen scored his 2nd and Matt Duchene scored as well just 1:10 apart to tie the game up. Washington re-took the lead again, but Nick Bonino and Mattias Ekholm would score :28 apart to tie the game and take the lead for good. Pekka Rinne got the win between the pipes to improve to 3-0-0 after allowing 5 goals on 21 shots faced in the winning effort.

The Los Angeles Kings will look to rebound after being pumped by the Vancouver Canucks in their last outing, falling to the Canucks 8-2 last time out. Vancouver led 2-0 after the 1st period and 3-0 before Tyler Toffoli got the Kings on the board partway through the 2nd period. Vancouver restored their three goal lead late in the 2nd, before Sean Walker cut the deficit back to 4-2 early on in the 3rd. That’s as close as L.A. got though, as Van-City would score four unanswered the rest of the way to send the Kings home empty handed. Jonathan Quick took the loss, falling to 0-2-0 after allowing all 8 goals on 25 shots faced in the losing effort.

A home dog can be tempting, especially in the early going in the season, but the issue here is that the Kings don’t know how to keep the puck out of their net, giving up 17 goals in their three goals this season. Nashville on the other hand has done well to keep the pace up early on. I think you could make a case for the over here as the Kings could once again give up the total on their own, but I think we can get some value here backing the Predators on the puck line. This is a game that Nashville should win rather easily given their strong start to the year.