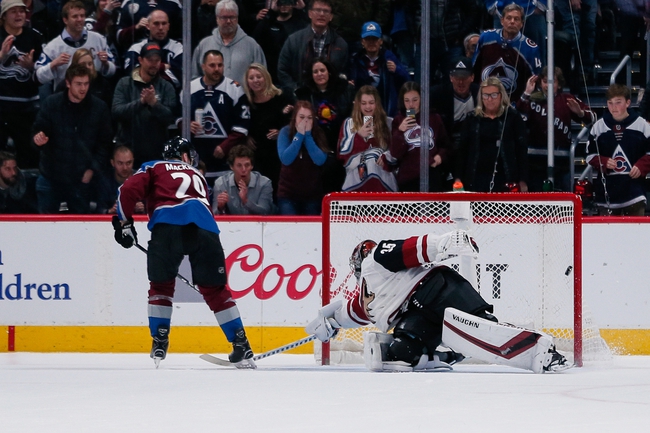 Where to watch: FS-Arizona, Altitude Stream live sports and exclusive originals on ESPN+. Sign up now!

The Arizona Coyotes and the Colorado Avalanche meet in NHL action from the Pepsi Center on Saturday night.

The Arizona Coyotes will look to get back to .500 after picking up their first win of the season with a 4-1 win over Vegas last time out to improve to 1-2-0. Conor Garland opened the scoring and Nick Schmaltz doubled the advantage, but Vegas would pull a goal back in the dying seconds of the first period. Conor Garland would restore the two goal cushion with his 2nd goal of the game, and Niklas Hjalmarsson added another one late in the 2nd to give Arizona the 4-1 scoreline that they’d hold onto until the final whistle. Darcy Kuemper got the win to improve to 1-2-0 on the year after stopping 37 of 38 shots faced in the winning effort.

The Colorado Avalanche will look to maintain their perfect start to the year after improving to 3-0-0 with a 4-2 win over Boston in their last outing. Boston jumped ahead 2-0 early on, but Nathan MacKinnon would pull one back in the last minute of the opening period. Pierre-Edouard Bellemare tied the game with the lone goal of the 2nd period, so it was off to the 3rd deadlocked before Andre Burakovsky broke the tie with just over seven minutes to go. Gabriel Landeskog added an empty net goal to seal the deal and help Colorado keep the perfect start going. Philipp Grubauer got the win to improve to 3-0-0 on the year after stopping 39 of 41 shots faced in the victory.

The plus money is kind of tempting with Arizona now that the Coyotes are on the board with a win this year. However, Arizona still tends to struggle on offense more often than not, and the price isn’t that bad considering Colorado’s strong start to the season as well as being at home. I’ll lay the reasonable price with Colorado as the more trustworthy team in the early going this season.