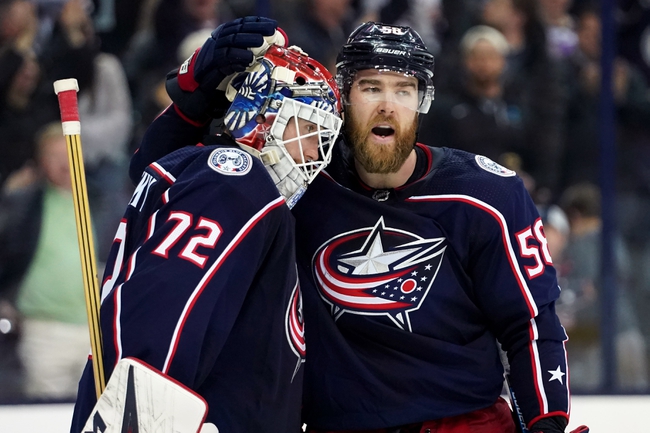 The Carolina Hurricanes look to remain undefeated as they welcome the Columbus Blue Jackets to Raleigh for a Metro division show down on Saturday.

The Blue Jackets play the back end of a double header on Saturday as they face off against the Hurricanes in hopes of avoiding a Storm Surge which has become customary after a Hurricanes home ice victory. Columbus was depleted in the offseason with some of their major pieces finding new homes including Matt Duchene and Artemi Panarin who signed lucrative deals with the Nashville Predators and New York Rangers, respectively. Columbus has been a tad slow to start the year as a result and are just 1-2 heading into Friday night action and are a woeful 2-10 in their last 12 contests against Eastern Conference opponents dating back to last season. With the Jackets and Canes both playing on Friday night the goaltending matchup remains to be arranged but we can assume that this one early in the season will feature a pair of backup goaltenders.

The Hurricanes have been among the league’s best to start the season and are a trendy pick to do some damage in the Metro division, especially since they were able to re-sign Sebastien Aho in the offseason. Carolina has thrived in back to back situations as they are a very impressive 11-1 in their last 12 contests when playing in the back end of a double header and one of the main reasons is attributed to the success of backup goaltender James Reimer who has become a viable option in behind Petr Mrazek since making his way to Raleigh. The Canes are also 7-0 in their last 7 divisional contests and are 23-8 in their last 31 games at home dating back to last season and should find themselves as a sizeable favorite in this spot once the line opens.

The Jackets are 8-3 in their last 11 road games and 1-4 in their last 5 against a team with a winning record while the Canes are 9-2 in their last 11 Saturday games and 21-5 in their last 26 games as a favorite. Both teams will likely serve up a backup here after a Friday night contest but the Canes prove to be too much here as they have more depth and a better backup goaltender which will make the difference in this one.