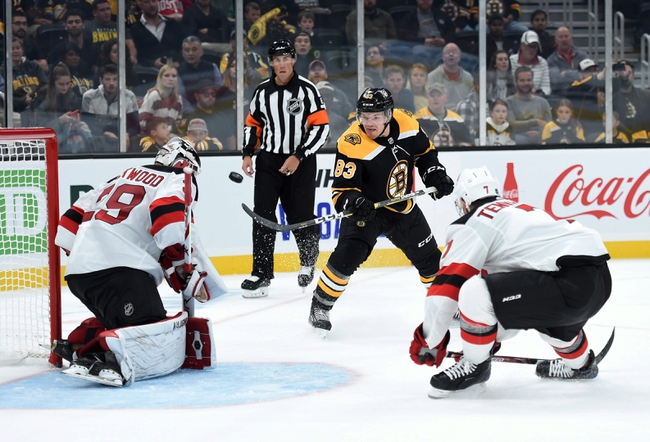 Where to watch: NESN, MSG Stream live sports and exclusive originals on ESPN+. Sign up now!

The New Jersey Devils and the Boston Bruins meet in NHL action from the TD Garden on Saturday night.

The New Jersey Devils will be on the hunt for their first win of the season after dropping to 0-2-2 on the year with a 4-3 shootout loss to Edmonton in their last outing. Kyle Palmieri opened the scoring for Jersey, but the lead lasted less than three minutes before Edmonton tied the game. Nikita Gusev gave the Devils the lead back in the later stages of the 2nd period, but once again, Edmonton would tie the game in the dying moments of the middle period. Dan Severson gave the Devils yet another lead, but for the 3rd time in as many periods, Edmonton would equalize shortly thereafter, sending us to some free hockey. Overtime solved nothing, so it was off to the shootout where the Devils missed all three of their opportunities while Edmonton buried their last attempt to take the extra point and send the Devils to yet another loss. MacKenzie Blackwood took the loss, falling to 0-1-2 on the year after allowing 3 goals on 22 shots in regulation and OT as well as giving up the lone goal in the shootout.

The Boston Bruins will be looking to bounce back from their first loss of the season coming in the form of a 4-2 loss to the Colorado Avalanche last time out. David Pastrnak and Zdeno Chara staked Boston an early 2-0 lead but as is the story for a lot of Bruins games this year, the B’s score early and the offense stalls the rest of the way. Colorado pulled one back in the late stages of the 2nd, and tie the game just before the midway point of the 2nd period. Colorado would take the lead late on in the 3rd and would seal the deal with an empty netter with just over a minute to go in the game. Jaroslav Halak took the loss, falling to 1-1-0 on the year after allowing 3 goals on 35 shots faced in the losing effort.

You get the feeling that New Jersey is probably due for a win, and Boston’s last memory at the TD Garden was watching St. Louis hoist the cup in last year’s finals. However, the Bruins have played well out of the gate on the road and you have to imagine that the fan base is ready and raring to go to watch the Bruins repeat last year’s success. The fact is that New Jersey’s goaltending is still suspect and Boston has some demons to exorcise at home, so I’ll side with Boston at home on the puck line to get some value out of the bet.