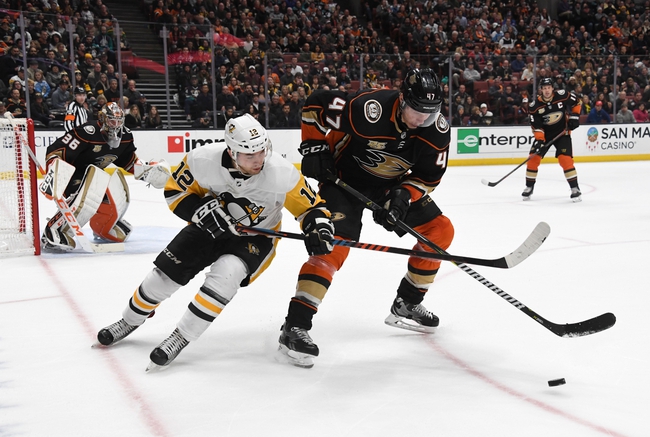 The Anaheim Ducks and the Pittsburgh Penguins meet in NHL action from the PPG Paints Arena on Thursday night.

The Anaheim Ducks will look to remain unbeaten after improving to 3-0-0 after a 3-1 road win over Detroit in their last outing. The game was scoreless through the opening 20 minutes and most of the 2nd period before Detroit got on the board in the final :05 of the 2nd. Anaheim would tie the game less than five minutes into the 3rd with a goal from Rickard Rakell. Nick Ritchie and Jakob Silfverberg scored :47 apart to push ahead 3-1 and would hold onto that lead until the final horn to maintain their perfect start. John Gibson got the win to improve to 3-0-0 on the year after stopping 31 of 32 shots faced in the victory.

The Pittsburgh Penguins will look to find a victory to get back to .500 on the year after a 4-1 loss to the Winnipeg Jets in their last outing. Sidney Crosby opened the scoring for the Penguins just :32 into the game, but that’s the only time the Penguins would find the back of the net as Winnipeg tied the game just over five minutes later and took the lead just before the midway point of the 1st. The Jets would score again in the first minute of the 2nd period and would add a 4th about ten minutes later, riding that 4-1 cushion to the final buzzer. Matt Murray took the loss, falling to 1-2-0 after giving up all four goals on 22 shots in the loss.

I get Pittsburgh being favored at home, and the Penguins are due to break out as they’re a better team than their record would indicate. You could also argue that Anaheim hasn’t played anyone of consequence as San Jose is struggling and winless out of the gate and Arizona’s sputtering offensively. However, the Ducks put forth a solid showing against Detroit, and this line isn’t showing much respect to what they’ve done in the first week of the season. The Penguins are also as banged up as it gets right now, with guys like Alex Galchenyuk, Bryan Rust, Evgeni Malkin and Patric Hornqvist all out for this game due to injury. I think if there’s a time to capitalize on Anaheim on the road against Pittsburgh, this is it, so I’ll take Anaheim and the plus money in this one.