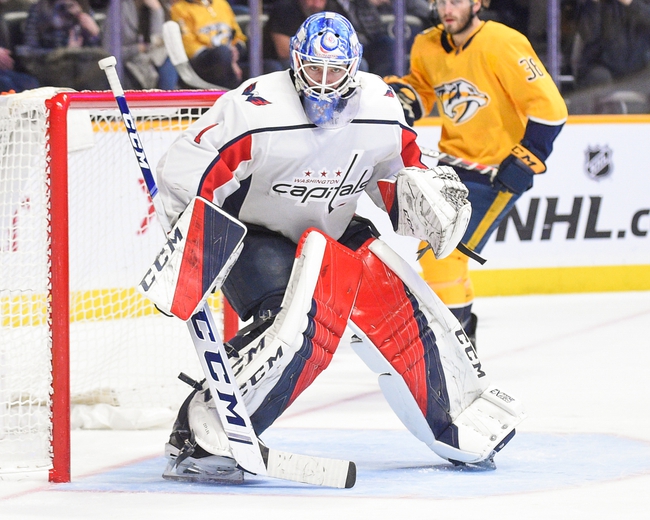 Where to Watch: NBCS-Washington, FS-Tennessee Stream live sports and exclusive originals on ESPN+. Sign up now!

The Washington Capitals and the Nashville Predators meet in NHL action from the Bridgestone Arena on Thursday night.

The Washington Capitals will look to build on their four game point streak to start the year, sitting at 2-0-2 after a second straight overtime loss, this one coming in the form of a 4-3 loss to Dallas last time out. Evgeny Kuznetsov opened the scoring for the Caps with the lone goal of the 1st period before Dallas tied the game in the first two minutes of the second period. John Carlson restored Washington’s lead heading into the 3rd before Dallas stormed back with a pair of goals to tie the game and take the lead just over four minutes apart. Nicklas Backstrom equalized for the Caps in the final minute sending us to some free hockey but it didn’t last as Dallas scored the game-winner in the opening minute of OT. Braden Holtby got the loss to fall to 1-0-2 on the year after allowing all 4 goals on 26 shots faced in the loss.

The Nashville Predators will look to build on a 5-2 victory over the San Jose Sharks from their last outing. Roman Josi opened the scoring for the Preds 6:16 into the game and doubled that advantage with his 2nd of the game after the midway point of the 2nd period. San Jose pulled a goal back sending us to the 3rd with a 2-1 scoreline. Kyle Turris and Filip Forsberg pushed the Predators ahead 4-1 before San Jose pulled one back with less than five minutes to go, but that’s as close as San Jose got as Dante Fabbro restored the three goal lead with an empty netter. Pekka Rinne got the win to improve to 2-0-0 on the year after stopping 33 of 35 shots faced in the win.

Washington and plus money is tempting considering that the Capitals are still one of the better teams in the NHL with a lot of experience. However, the Caps have dropped the last six meetings with the Predators, and Holtby (should he start here) hasn’t has a lot of luck against Smashville, going 0-2-1 with a 5.21 GAA in that stretch. On the other side, Rinne has a 5-1-0 record with a 2.50 GAA against Washington in his career, and Juuse Saros is 3-0-0 with a 2.33 GAA against the Caps, so I don’t think there’s a bad option for Nashville here. Bridgestone Arena is one of the more underrated tough venues in the NHL, and I think the Predators come out with a win in this one, so I’ll lay the juice with Nashville here.