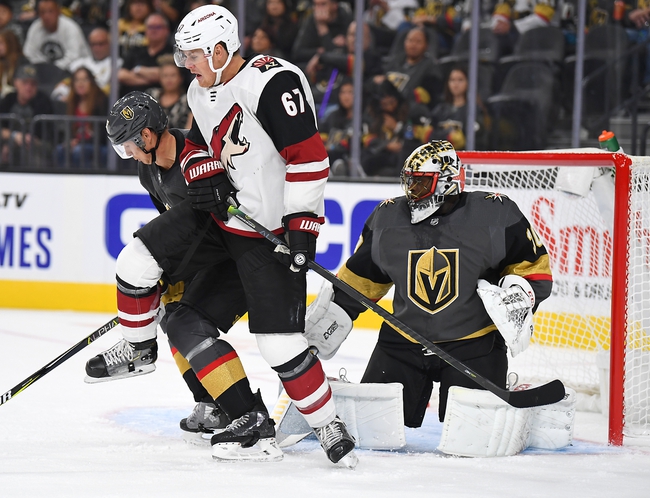 Where to watch: ATT-RM, FS-Arizona Stream live sports and exclusive originals on ESPN+. Sign up now!

The Vegas Golden Knights and the Arizona Coyotes meet in a Pacific Division tilt in NHL action from the Gila River Arena on Thursday night.

The Vegas Golden Knights will be looking to rebound from their first loss of the season coming in the form of a 4-3 loss to the Boston Bruins in their last outing. Mark Stone and Reilly Smith scored 1:44 apart to give Vegas an early 2-0 lead but Boston would storm back and tie the game before the end of the 1st period. Boston pushed ahead to a 4-2 advantage with a pair of markers 1:54 apart, before Max Pacioretty cut the deficit in half but that’s as close as Vegas got as the Bruins closed the door the rest of the way to secure the victory. Marc-Andre Fleury took his first loss of the season after allowing all 4 goals on 35 shots faced in the losing effort.

The Arizona Coyotes will be on the hunt for their first win of the season after falling to Boston by a final score of 1-0 last time out. Boston scored late in the 1st period, and that was the only time the puck would find the back of either net, despite Arizona outshooting the Bruins 35-26 in the losing effort. Clayton Keller and Phil Kessel led the ‘Yoted with 5 shots on goal each while Derek Stepan, Jakob Chychrun and Carl Soderberg each had 3 shots on goal. Darcy Kuemper took the loss, falling to 0-2-0 despite stopping 25 of 26 shots faced in the losing effort.

I’ve said getting a home dog is tempting and the early season is where you can find the most value in backing underdogs as teams are still getting their feet underneath them in a real-time game setting. However, the road team’s won the last five meetings between the two sides and the Coyotes’ offensive struggles have continued into their first couple of games this season. Vegas has just shown more offensively in the early going and with a reasonable price on the road here, I have to back Vegas in this one.