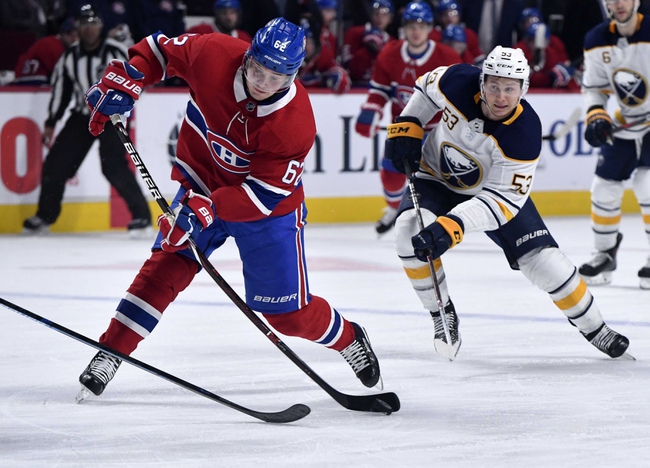 Where to Watch: Sportsnet, MSG-Buffalo Stream live sports and exclusive originals on ESPN+. Sign up now!

The Montreal Canadiens and the Buffalo Sabres meet in an Atlantic division tilt in NHL action from KeyBank Center on Wednesday night.

The Montreal Canadiens will look to build on their first win of the season coming in the form of a 6-5 shootout victory over Toronto in their last outing. Max Domi opened the scoring for the Habs just 1:08 into the game. Toronto tied the game and took the lead by the end of the 1st. Toronto made it 4-1 early in the 3rd, but Jonathan Drouin and Brendan Gallagher scored 1:02 apart to cut the deficit to 4-3 and Jeff Petry and Phillip Danault buried 2:18 apart to tie the game and give Montreal the lead with just under five minutes to go. Toronto would tie the game late in the period to send us to some free hockey. Overtime solved nothing so it was off to the shootout where Paul Byron scored and Toronto missed all three of their attempts to give Montreal the extra point. Carey Price got the win to improve to 1-0-1 on the year after allowing 5 goals on 37 shots faced in the winning effort as well as all three shots faced in the shootout.

The Buffalo Sabres will look to build on their early point streak to start the season, falling to 2-0-1 on the year after a 4-3 overtime loss to Columbus in their last outing. Columbus jumped out to a 2-0 lead late in the opening period with a pair of goals :54 apart, but Marcus Johansson and Jeff Skinner would tie the game with goals in the 2nd period. Columbus would re-take the lead but Victor Olofsson would tie the game with just over a minute to go, sending us to free hockey here as well but it wasn’t meant to be as Columbus scored the overtime winner. Linus Ullmark ended up with the loss after allowing all 4 goals on 44 shots faced in the losing effort.

I think Montreal can take some comfort in knowing that they were able to rally against one of the better teams in the NHL like Toronto and come back from 3 down with 4 goals in a period. However, Buffalo is a much better team at home than on the road and were nearly able to take down Columbus last time out but fell just short. Ultimately, I think that Montreal is still a work in progress on the road and Buffalo at home with a low line should be the play here.