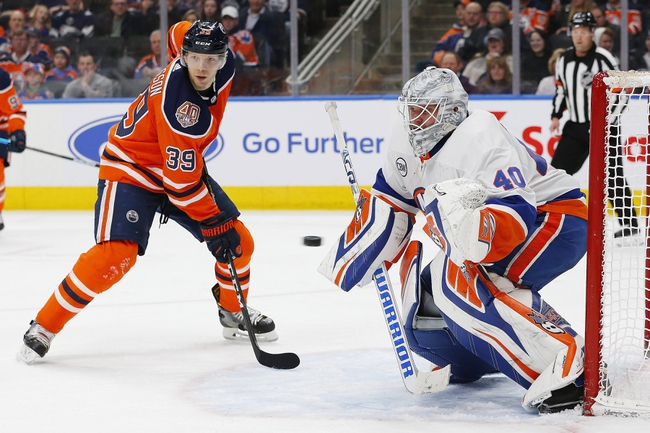 Where to watch: MSG+ Stream live sports and exclusive originals on ESPN+. Sign up now!

The Edmonton Oilers and the New York Islanders meet in NHL action from Nassau Coliseum on Tuesday night.

The Edmonton Oilers will look to build on back-to-back wins to start the year after a 6-5 win over Los Angeles last time out. Connor McDavid scored just :53 into the game before Los Angeles tied it up and took the lead before the midway point of the opening frame. James Neal would tie the game at two just after the halfway point of the 1st before the Kings restored their lead. Zack Kassian tied the game at 3-3 heading to the 3rd where L.A. took a 4-3 lead but Joakim Nygard would tie the game again. Once again the Kings took the lead before Darnell Nurse tied the game at 5-5 just 1:51 after the previous goal and James Neal would bury his 2nd of the game to steal the win for the Flames here. Mike Smith got the win to improve to 2-0-0 after allowing all 5 goals on 32 shots faced in the winning effort.

The New York Islanders will look to build some momentum after picking up their first win of the year in a 4-1 win over Winnipeg in their last outing. The game was scoreless through the opening 20 minutes before Josh Bailey broke the deadlock early in the 2nd period and Brock Nelson doubled the advantage just 2:47 later. Anders Lee pushed the lead to 3- late in the 2nd before Winnipeg pulled a goal back. That was as close as the Jets would get though as Anthony Beauvillier restored the three goal cushion early on in the 3rd period. Thomas Greiss got the win after allowing just one goal on 36 shots faced in the winning effort.

New York playing at Nassau kind of wakes the Islanders up and these guys seem to get up for the games at Uniondale. However, the road team’s had all of the recent success between the two teams and this line is showing no love to what the Oilers have done so far. I think this early in the season is the best time to capitalize on underdogs, and I think we have a good one with the Oilers so I’ll side with Edmonton here.