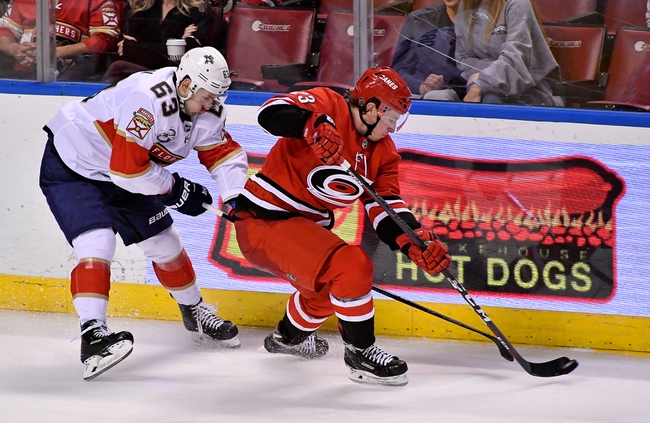 Where to Watch: FS-Florida, FS-Carolina Stream live sports and exclusive originals on ESPN+. Sign up now!

The Carolina Hurricanes and the Florida Panthers meet in an NHL tilt from the BB&T Center on Tuesday night.

The Carolina Hurricanes will look to stay perfect after opening the season at 3-0-0 with a 4-3 OT win over Tampa Bay in their last outing. Brett Pesce opened the scoring for the Hurricanes just 1:14 into the game before Tampa Bay tied it up just 1:08 later. The Bolts held a 3-1 lead by the end of the first period but Erik Haula would pull one back in the second and Dougie Hamilton would tie the game at 3-3 in the latter stages of the 3rd period, sending us to some free hockey. Jaccob Slavin got the OT winner for Carolina to complete the comeback for the ‘Canes in the winning effort. Petr Mrazek got the win to improve to 2-0-0 after stopping 10 of 13 shots faced in the winning effort.

The Florida Panthers will look to build some momentum after picking up their own 4-3 win over Tampa Bay last time out. The game was scoreless through the first period and through the first half of the 2nd period before Mike Hoffman scored a pair of goals 1:26 apart to stake the Panthers a 2-0 lead. Noel Acciari made it 3-0 before Tampa Bay finally got on the board late in the middle frame. Hoffman completed his hat trick :17 into the 3rd period, and the Panthers would hold on despite a pair of goals from the Bolts later in the period. Sergei Bobrovsky gt the win to improve to 1-1-0 after stopping 32 of 35 shots faced in the win.

I get that Florida is coming off of a win against last year’s president’s cup winners, and the Panthers are at home. However, this iine is showing absolutely no respect to what Carolina has done in the first week of the season. The Hurricanes have just found ways to win hockey games and I think even on the road, getting Carolina at this price given their start to the year is too good to pass on so I’ll take Carolina here.