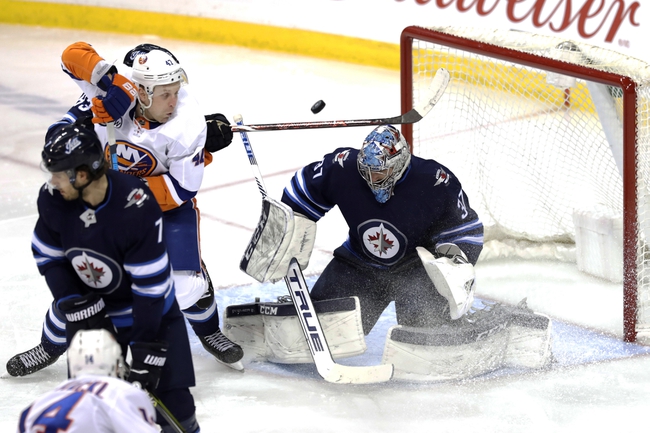 The Winnipeg Jets and the New York Islanders meet in NHL action from Barclays Center on Sunday night.

The Winnipeg Jets will look to build some steam after rallying for their first win of the season in a 5-4 shootout win over New Jersey in their last outing. New Jersey jumped out to a late 1-0 first period lead and doubled the lead within the first two minutes of the 2nd. The Devils scored a pair in 1:18 to push the lead to 4-0 before Dmitry Kulikov got the Jets on the board in the dying seconds of the middle frame. Jack Roslovic, Mathieu Perreault and Neal Pionk would each bury in the 3rd to tie the game at 4-4, sending us to some free hockey at the Prudential Center. OT solved nothing, so it was off to the shootout. Kyle Connor scored the first attempt for the Jets and the Devils matched, but would miss their next three attempts while Blake Wheeler scored in the 4th round of the shootout to complete the comeback. Laurent Brossoit got the win after allowing 4 goals on 39 shots faced in the win.

The New York Islanders will look to rebound from a 2-1 loss in their season opener at home against Washington in their last outing. Washington opened the scoring just after the halfway point of the opening period, but Devon Toews would tie the game at one just 2:02 later. The game would stay level at one before Washington took the lead for good late in the 2nd as the Isles couldn’t find an equalizer in the rest of the second and all through the final period. Semyon Varlamov took the loss after allowing both goals on 28 shots faced in the losing effort.

I get New York being favored at home but the Isles didn’t look great against a goaltender making his NHL debut in Ilya Samsonov. Say what you want about Winnipeg and their issues in house right now, but the Jets rallied from four goals down and cashed as an underdog for us on Friday night and this line is too good to pass on so I’ll take another shot with Winnipeg and plus money here.