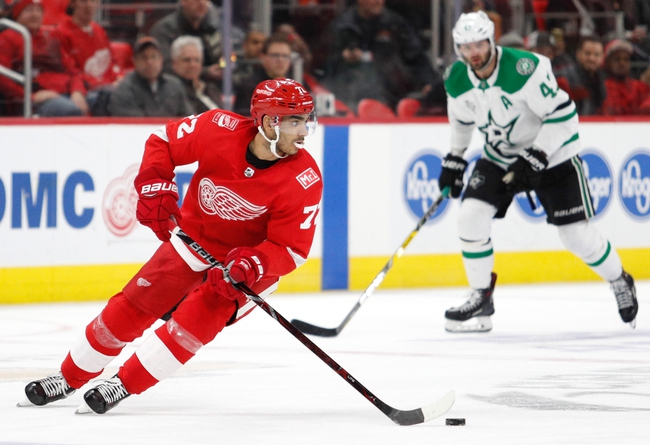 Where to Watch: FS-Southwest, FS-Detroit Stream live sports and exclusive originals on ESPN+. Sign up now!

The Dallas Stars and the Detroit Red Wings meet in NHL action from Little Caesars Arena on Sunday.

The Dallas Stars will be on the hunt for their first win of the season after back-to-back one goal defeats to start the year with a 3-2 loss to St. Louis in their last outing. St. Louis opened the scoring just over a minute into the game before Mattias Janmark tied the game up for Dallas just after the midway point of the opening period. Miro Heiskanen scored the only goal of the 2nd period to stake Dallas a 2-1 lead after 40 minutes of play, but the Blues would tie the game less than 5 minutes into the 3rd and would take the lead for good just after the midway point of the final frame. Ben Bishop ended up with the loss to fall to 0-2-0 this season after giving up all 3 goals on 30 shots faced in the loss.

The Detroit Red Wings will look to build off of their first win of the season, upsetting Nashville on the road by a final score of 5-3. Tyler Bertuzzi and Anthony Mantha scored 1:11 apart just after the midway point of the opening period to give Detroit a 2-0 lead after 20 minutes of play. Nashville scored a pair of goals in the 2nd to equalize the game heading into the 3rd where Dylan Larkin gave Detroit a 3-2 lead just over 4 minutes into the 3rd period. Nashville would tie the game at 3-3 just :46 later, but the Wings would take the lead for good thanks to a Luke Glendening marker just before the midway point of the 3rd and Bertuzzi added his 2nd of the game on an empty net to secure the 5-3 final score line. Jimmy Howard got the win after allowing all three goals on 42 shots faced in the winning effort.

This line confuses me a bit. I’m trying to figure out why Dallas is favored on the road when both teams are coming off of a back-to-back. Sure, the trip from St. Louis to Detroit isn’t as far as Nashville to Detroit, but this line is showing no respect to the effort that Detroit put forward against Nashville in their opener. Dallas has battled but haven’t had the results to show for it, so I’ll side with the home dog and take Detroit with the plus money on Sunday.