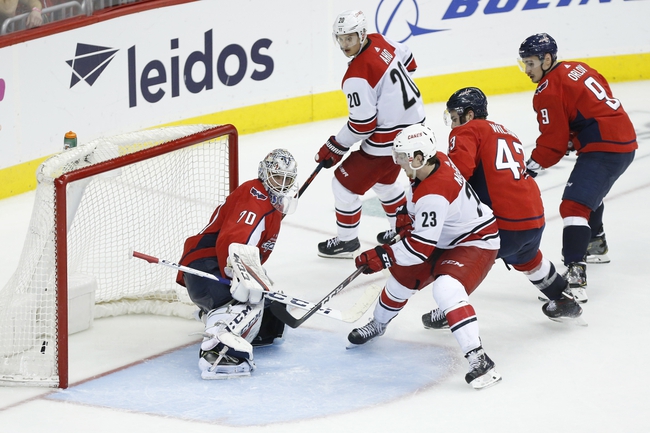 Where to watch: NBCS-Washington, FS-Carolina Stream live sports and exclusive originals on ESPN+. Sign up now!

The Carolina Hurricanes and the Washington Capitals meet in NHL action from the Capital One Arena on Saturday night.

The Carolina Hurricanes will look to build on their season-opening 4-3 shootout win over Montreal in their last outing. Lucas Wallmark opened the scoring for the ‘Canes with the lone goal of the opening frame before Martin Necas doubled the advantage to make it 2-0 but Montreal would tie the game just over three minutes later with a pair of goals 1:04 apart and would take the lead late in the 2nd to make it 3-2 Habs heading into the 3rd. Erik Haula scored his first in a Carolina uniform to tie the game at three and send us to free hockey. Overtime solved nothing so it was off to the skills competition as Dougie Hamilton scored the lone goal of the shootout to give the ‘Canes the extra point. Petr Mrazek got the win after allowing 3 goals on 36 shots as well as stopping all 3 attempts faced in the shootout.

The Washington Capitals will look to build on their solid 2-0 start to the year after a 2-1 win over the New York Islanders in their last outing. Jakub Vrana would open the scoring for the Caps but the lead lasted all of 2:02 before the Isles tied the game at one heading to the 2nd. T.J. Oshie broke the deadlock late in the middle frame, and that’s all Washington would need as the Caps kept everything out in the 3rd to hold on for their second road win in as many tries. Ilya Samsonov got the win in his NHL debut after stopping 25 of 26 shots faced in the winning effort.

The Canes and the plus money is kind of tempting as Carolina is a talented group and teams haven’t fared well in home openers for most of the early going this season. However, Washington getting this kind of price is a steal given how well the Capitals have played in their first couple of games and I think the Caps make a statement at home here so I’ll lay the juice with Washington in this spot.