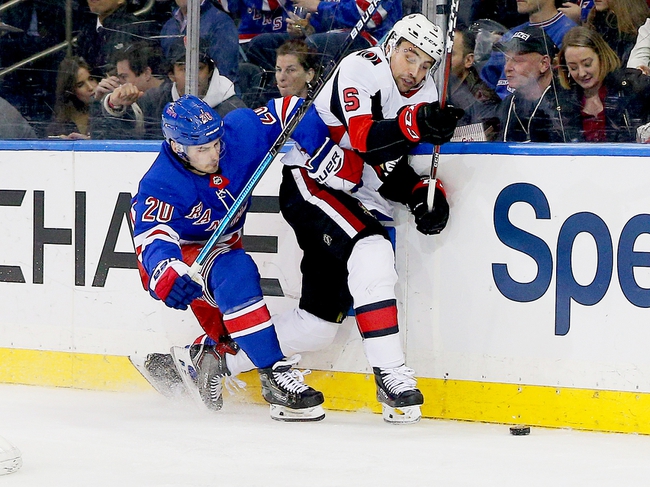 Where to watch: City, MSG Stream live sports and exclusive originals on ESPN+. Sign up now!

The New York Rangers and the Ottawa Senators meet in NHL action from the Canadian Tire Center on Saturday night.

The New York Rangers will look to build on their 6-4 season-opening win over Winnipeg from Thursday night. Marc Staal opened the scoring for the Rangers just after the midway point of the first but Winnipeg would tie the game at one later on in the opening frame. Artemi Panarin gave New York a 2-1 lead with his 1st goal as a Ranger on the power play, but Winnipeg would tie it up again just :30 later. Jacob Trouba scored his 1st as a Ranger as well to make it 3-2, but that lead lasted all of :09 before the game was square again at 3-3. Winnipeg took the lead early on in the final frame, but Mika Zibanejad, Brett Howden and Brendan Smith would each bury to give the Rangers the final 6-4 score line. Henrik Lundqvist got the win after stopping 43 of the 47 shots faced in the winning effort.

The Ottawa Senators will look to rebound from their season-opening 5-3 loss to Toronto in their last outing. Brady Tkachuk gave the Sens an early lead just :27 into the game and Ottawa would carry that lead into the 2nd. It was short lived though, as Toronto surged ahead with a pair of goals 2:22 apart. Scott Sabourin would tie the game just 1:09 later but the Leafs would respond and take a 4-2 lead into the final period. Toronto made it 5-2 before Bobby Ryan added a consolation goal late, but it was too little too late as Ottawa fell short in the defeat. Craig Anderson ended up with the loss after allowing all 5 goals on 42 shots faced in the losing effort.

Getting Ottawa at plus money in their home opener is kind of tempting especially given that Ottawa has been a house of horrors for the Rangers in recent years, but the fact is that Ottawa is simply one of the worst teams in the league and showed little signs of anything otherwise in the season opener. I’m not ready to crown the Rangers champions after one game, but their offseason acquisitions like Panarin and Trouba have started paying dividends in the first game and I just think that New York is in a better position than Ottawa is here. I’ll lay the juice with the Rangers in this spot as I simply trust New York which is something I can’t really say for Ottawa.