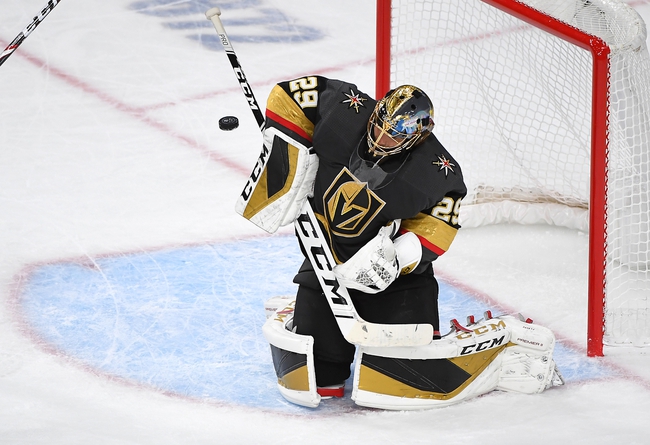 Where to watch: ATTRM, NBCS-California Stream live sports and exclusive originals on ESPN+. Sign up now!

The Vegas Golden Knights and the San Jose Sharks meet in the second leg of a home and home set to start the year in NHL action from the SAP Center on Friday night.

The Vegas Golden Knights will look to make it two in a row to start the year while the Sharks will look to exact some revenge and pick up their first win of the year after Vegas took the season opener against San Jose by a final count of 4-1 on Wednesday.

Mark Stone and Reilly Smith staked Vegas a two goal lead within the first 5:21 of the game with a pair of goals 1:35 apart before Marcus Sorensen got the Sharks on the board to make it 2-1 after 20 minutes of play.

Cody Glass scored early in the 2nd to restore the two-goal lead with his first career NHL goal before Smith added his 2nd goal of the game short-handed early in the 3rd to give Vegas the 4-1 cushion that they would hold on to until the final horn. Marc-Andre Fleury got off to a winning note to start his season, stopping 21 of 22 shots faced in the win while Martin Jones took the loss for San Jose, allowing 4 goals on 35 shots faced in the defeat for the Sharks.

I want to take a shot with San Jose and the plus money as the Sharks are a really good team at home and you have to think that with such a quick turnaround, San Jose will be eager to bounce back. However, Vegas has simply been the better team of the two allowing one goal in each of their three games against the Sharks this season, including the two meetings in the preseason and have outscored the Sharks 12-3 in those games. It’s hard to beat the same team back-to-back in such a short timespan, but I think Vegas has all the tools to get it done so I’ll lay the juice with the Golden Knights here.