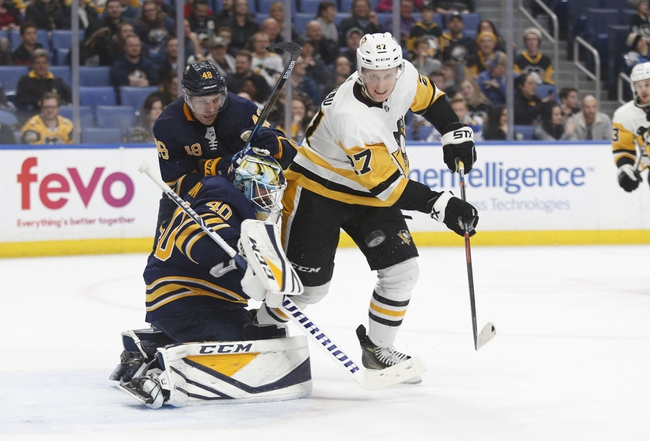 Where to Watch: ATTSN-PT, MSG-B Stream live sports and exclusive originals on ESPN+. Sign up now!

The Buffalo Sabres and Pittsburgh Penguins meet Thursday in NHL action at the PPG Paints Arena.

The Buffalo Sabres haven’t made the playoffs since the 2010-11 season, and they now begin a new era under coach Ralph Krueger, who is 60 years old and only has 48 NHL games under his belt. The Sabres have a ways to go defensively and have to figure out how to improve an offense that got off a lot of shots but couldn’t find the back of the net. The good news for Buffalo is that Jack Eichel is an impressive player to build around and Jeff Skinner has topped 30 goals in three of his last six seasons. The addition of Marcus Johansson could go a long way to building depth around those two, and Carter Hutton is a capable goalie who is due for a bounce back season. The Buffalo Sabres have potential and could be a fine playoff contender, but this team may be a year away from finally knocking down the door.

The Pittsburgh Penguins haven’t missed the playoffs since 2005-06, but after losing in the first round, this franchise felt it needed a spark to get back on track. Alex Galchenyuk comes over from Arizona and is kind of in a make or break situation after failing to fulfill expectations. Sidney Crosby will continue to be one of the best players on the planet and his pairing with Evgeni Malkin has been nothing short of magic. Jake Guentzel also has a real chance at a breakout season with Phil Kessel no longer around. The Pittsburgh Penguins have the core needed to chase another championship, it’s all about Mike Sullivan pushing the right buttons.

The Pittsburgh Penguins have won seven of the last 10 meetings against the Buffalo Sabres and four of those wins came by two or more goals. The Sabres will be a team to watch this season because they're often underdogs, and this year they have rising talent and could be a dark horse for a playoff spot if things come together quickly. However, the Pittsburgh Penguins are usually money on their home ice and they've had no problem beating up on Buffalo over the years. I'll take the Penguins and the PL for added value.