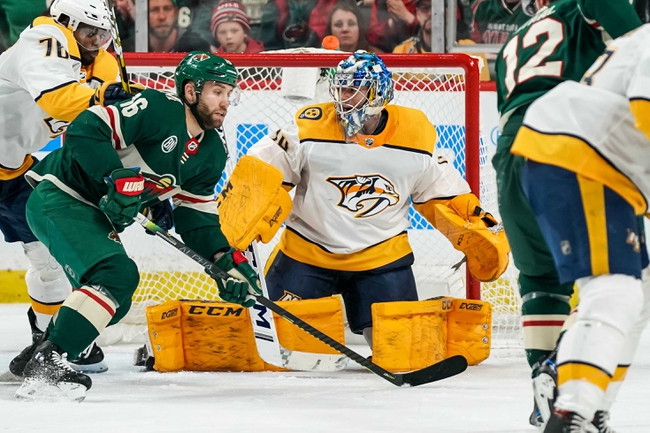 Where to watch: NBCSN Stream live sports and exclusive originals on ESPN+. Sign up now!

The Minnesota Wild and Nashville Predators meet Thursday in NHL action at the Bridgestone Arena.

The Minnesota Wild watched their six-year playoff streak come to an end due to an offense that couldn’t get going, and they now enter a fourth year under coach Bruce Boudreau. The Wild are pretty much the same tough defensive group they were last season, and they should be even better with the return of Matt Dumba, who played just 32 games due to injury. If Devan Dubnyk or Alex Stalock can figure things out in net, the Wild are going to be one of the tougher teams in the league to score on nightly. The Minnesota Wild now just need to find some depth offensively, as there were just three players who scored 20 or more goals, and one of those guys in Zach Parise isn’t getting any younger and has a history with injuries.

The Nashville Predators have yet to miss the playoffs under Peter Laviolette, so it’s only right he’s back for another season with increased expectations. The Predators return their top-seven scorers from last season and add Matt Duchene to the mix, giving this side depth needed to make a Stanley Cup push. The Nashville Predators were top-10 in a lot of major defensive categories last season, and while losing P.K. Subban does hurt, a trio of Roman Josi, Ryan Ellis and Mattais Ekholm is still arguably the best in the league. In terms of current odds to take home the hardware, the Predators would make a strong value play as a future bet if you’re in the market this early in the process.

The Nashville Predators have won each of the last five meetings against the Minnesota Wild, but all of those games were tight and three of those meetings went into overtime. As I mentioned before, I'm high on the depth of these Predators and think they're worth a future bet to win it all given the odds we're getting in the month of October. The Minnesota Wild are a solid club that returns majority of last years team, but the lack of offense and the history between these teams, I have to lean toward the Predators on their home ice.