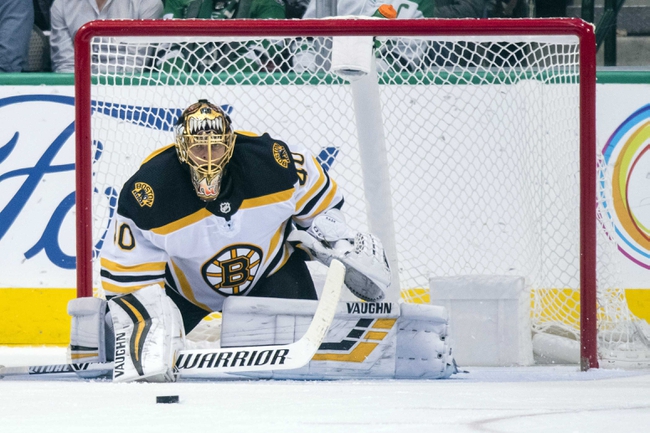 The Boston Bruins and the Dallas Stars meet to kick off their 2019-2020 NHL regular seasons from American Airlines Center on Thursday night.

The Boston Bruins will look to take that last step of improvement after a successful 2018-19 season that saw the B’s finish with 107 points, good for 2nd in the East and 2nd in the Atlantic division behind President’s trophy winner Tampa Bay. The Bruins would go on to vanquish the Toronto Maple Lefs in the first round for the second straight year before defeating Columbus in six games and sweeping Carolina on the way to the Stanley Cup Finals where Boston would fall in game seven to the Blues. The Bruins return the majority of the roster that got them within one game of lifting Lord Stanley’s mug, including points leader Brad Marchand who racked up team-highs of 100 points and 64 assists while David Pastrnak had a team-high 38 goals as part of his 81-point campaign. Patrice Bergeron and Devid Krejci as also back as well while Tuukka Rask and Jaroslav Halak are back to split Boston’s goaltending duties with both sitting in the top 11 goaltenders last season in terms of GAA amongst goalies with at least 31 starts. Only time will tell if the Bruins can replicate last season’s success as six key cogs are expected to hit unrestricted free agency this summer.

The Dallas Stars will look to take another step in the right direction after finishing last season with a record of 43-32-7, good for 93 points and the 6th spot in the Western Conference, taking one of the wild card spots. Dallas took down Central division champ Nashville in round one before being defeated by St. Louis in seven in the second round. The Stars made a couple of splashes in free agency to help improve a terrible offense that scored just 210 goals last season, signing Joe Pavelski from the Sharks after a 38-goal campaign last year and taking a shot on sniper Corey Perry after an injury plagued 2018-19 season. Tyler Seguin and Alx Radulov are back to anchor the Stars’ up front while Ben Bishop is back between the pipes after posting a .934 save percentage and a 1.94 GAA last season.

I get Dallas being favored at home and Bishop is one of the NHL’s top goaltenders. However, this is still a Dallas team that has to prove they’re not the same anemic offense from last season, and I’m not sure we will see that on night one against a Boston team that’s returning pretty much their entire team that was one win away from the Stanley Cup last season. I just can’t pass up this kind of price with Boston, so I’ll side with the Bruins on the road on opening night.