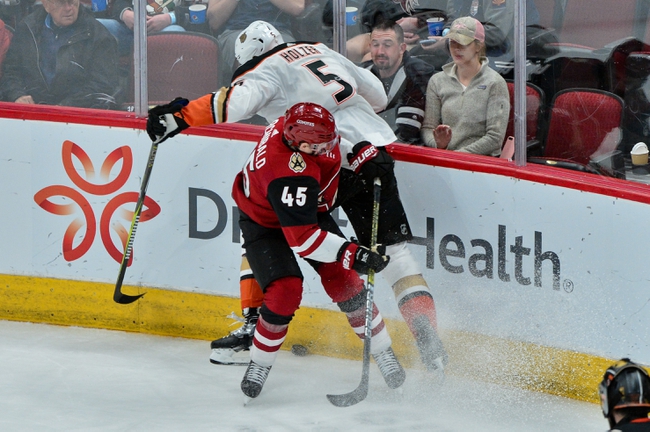 Where to watch: PRIME, FS-A, FS-A PLUS Stream live sports and exclusive originals on ESPN+. Sign up now!

The Arizona Coyotes and Anaheim Ducks meet Thursday in NHL action at the Honda Center.

The Arizona Coyotes haven’t made the playoffs in seven years and enter a third season under coach Rick Tocchet. While last years 39 wins were the most during this drought, the Coyotes aren’t going to get over the hump until the offense improves. That’s why the Coyotes went out and snagged Phil Kessel and Carl Soderberg, two guys who can find the back of the net while taking pressure off other players. With an offense that was 28th in goals per game, 20th in shots and 26th in power play, the Coyotes should see an uptick this season in offensive production. With an improved offense and one of the best penalty kills in the sport last year, the Arizona Coyotes could finally have what it takes to see postseason hockey for the first time in a long time.

The Anaheim Ducks missed the playoffs for the first time in six years and now begin a new era under coach Dallas Eakins. The Ducks had a lot of injuries last year, so while the offensive numbers were some of the worst in the league, it’s hard to really judge this team based on so much missed time. The good news is the Ducks have one of the top goalies in John Gibson and a bunch of proven veterans in Jakob Silfverberg, Ryan Getzlaf and Adam Henrique to anchor the squad. The bad news is the Anaheim Ducks enter the year already banged up with the loss of Ryan Kesler and Patrick Eaves, two players expected to miss the entire season. The Ducks have a proven core, it’s just a matter of staying healthy.

The Arizona Coyotes should be much improved offensively with some of the moves they made this offseason and the Anaheim Ducks should be improved across the board with injured players returning. Four of the last nine meetings between the Coyotes and the Ducks have produced seven or more goals. The last three meetings between the Coyotes and Ducks have averaged 6.6 goals. This total seems a bit low and likely factoring in last seasons offensive struggles. I'll take my chances with the over here.