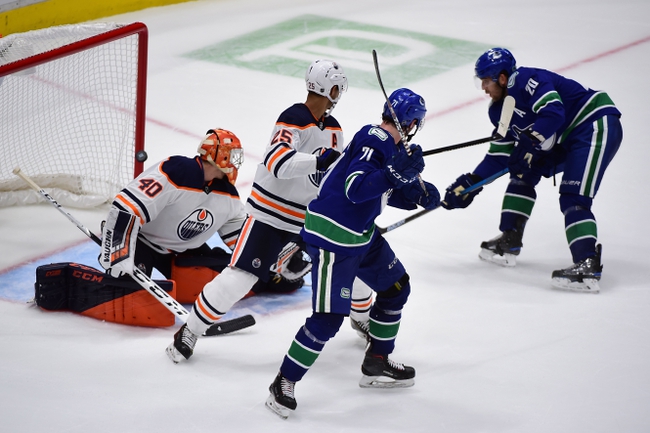 Where to watch: SN, SN360 Stream live sports and exclusive originals on ESPN+. Sign up now!

The Vancouver Canucks and Edmonton Oilers meet Wednesday in NHL action at the Rogers Place.

The Vancouver Canucks enter a third season under coach Travis Green and hope to end a four-year playoff drought. The Canucks have a really good goaltending tandem in Jacob Markstrom and Thatcher Demko, who are going to keep them in games more times than not. The issue for the Canucks is finding consistent offense to get out of this funk, but Elias Pettersson, Bo Horvat and Brock Boeser all return after topping 20 goals last season and they’re still young enough to take their game to the next level. There’s a lack of depth with the Canucks, so injuries could sink this team at any point, but there’s a lot of young talent to be excited about and things could break if key guys stay healthy. The Vancouver Canucks have won their last three regular season openers.

The Edmonton Oilers enter the Dave Tippett era, and he has the task of turning around a franchise that has one playoff appearance in the last 10 years. The Oilers have a fighting chance each and every night as long as Connor McDavid, arguably the best player in the world, is on the ice. It’s now about finding the depth around him to turn a one-man team into a serious playoff threat. Leon Draisaitl is a wonderful start and is coming off his best season yet and Darnell Nurse is another player who is improving with age. Ryan Nugent-Hopkins had 69 points last year, which is the most he’s had in his career. The addition of James Neal could be a steal if he’s able to turn back the clock a bit. There’s potential in Edmonton, but McDavid needs to find consistent help for this team to go anywhere. The Edmonton Oilers have split their last two regular season openers.