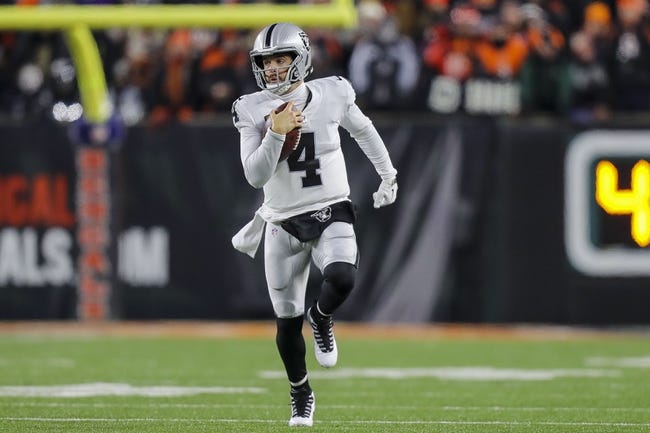 The Jacksonville Jaguars and Las Vegas Raiders kick off the NFL preseason on Thursday in the Hall of Fame game at Tom Benson Hall of Fame Stadium. When these two teams faced off in December of 2019 it was the Jaguars that won 20-16.

The Jaguars are still going through a rebuild, but they made some changes this offseason that they hope gets them closer to making the playoffs rather than the number one overall pick. On offense, the two most important players are probably quarterback Trevor Lawrence and running back Travis Etienne but neither player is expected to play in this game. That means a lot more time for the other three quarterbacks that are trying to make the roster. C.J. Beathard, Jake Luton, and Kyle Sloter are all expected to get plenty of run in this game. Running back James Robinson is also going to miss this game which means guys like Snoop Conner will get a ton of run out of the backfield. The Jaguars big offseason addition was Christian Kirk, but he probably won’t get many snaps here.

On the other side of this matchup is the Raiders who also made some big additions this offseason in hopes they will be competitive in a very good division. The team made a change at coach bringing in Josh McDaniels. The Raiders also traded for Davante Adams but it’s hard to imagine he is going to play a ton in this game. Behind Derek Carr at quarterback is Jarrett Stidham, Nick Mullens, and Chase Garbers. The offensive line for the Raiders has a ton of questions, and there are a few key battles that will be closely contested throughout training camp.

There are a ton of questions about who will play for these teams, but I think the advantage here sits with the Raiders. Beathard has had some major issues with turnovers during his career and that is going to sneak up on him again here. Look for the Raiders defense to find success and that will be the difference as Las Vegas get the job done. Back Las Vegas against the spread.

Get Premium Picks Start Winning Now »
The pick in this article is the opinion of the writer, not a PickDawgz site consensus.
Previous Pick
Los Angeles Rams at Cincinnati Bengals - 2/13/22 NFL Super Bowl Picks and Predictions
Next Pick
New York Giants at New England Patriots - 8/11/22 NFL Picks and Prediction