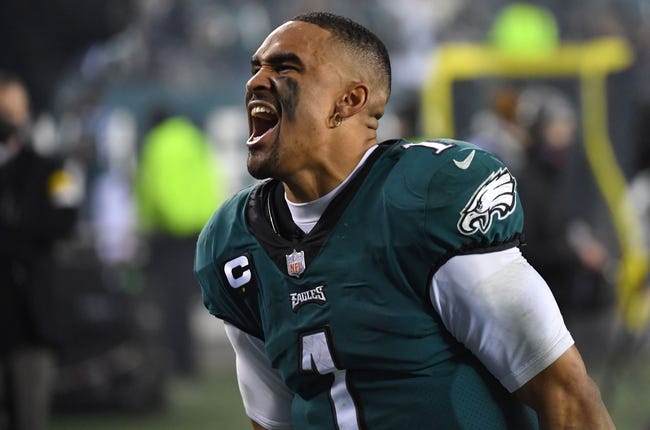 The Philadelphia Eagles will take on the Washington Football Team on Sunday from FedEx Field in Washington.

The Eagles still carry playoff hopes after a 34-10 home win over the New York Giants last weekend. Jalen Hurts threw for 199 yards and two touchdowns to allow the eagles to remain in control of the final AFC playoff spot.

Jalen Hurts has been inconsistent for the Eagles this season. Quarterback Jalen Hurts has completed 61.1% of his passes for 2,930 yards and 16 touchdowns and 9 interceptions. His top target has been rookie wide receiver DeVonta Smith.

The Washington Football team is coming off of a 56-14 loss at the hands of the Dallas Cowboys last Sunday night. Taylor Heinicke was hard to watch last time out. He went 7 for 22 for 121 yards with 1 touchdown to 2 interceptions.

After losing Ryan Fitzpatrick early in the season, the Washington Football Team has had to rely on Taylor Heinicke. He has thrown for 3,052 yards for 20 touchdowns to 15 interceptions. He has a QBR of 43.7.

The Washington offense averages 324.3 yards a game which is 20th in the league. They are scoring 19.8 points per game as they give up 373.4 yards and 27.1 points per game to their opponents.

Washington is still in the playoff race, but will be looking for a miracle if they were to make it. The first domino to fall would be getting a win in this one. The Eagles however, should be looking to get into playoff form.