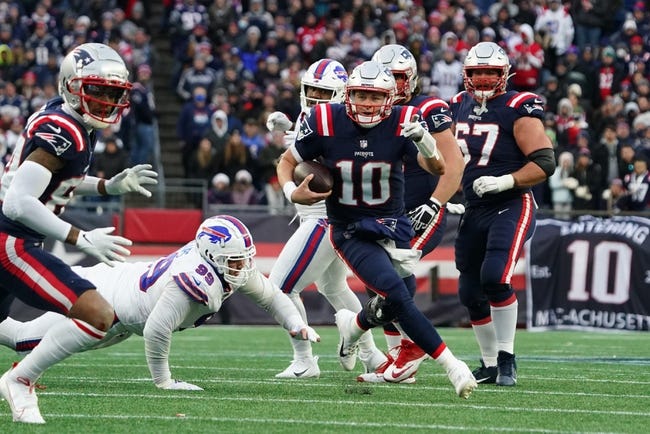 The New England Patriots will host the Jacksonville Jaguars on Sunday from Gillette Stadium.

The Patriots are coming off of two losses, their most recent coming against the Bills. Mac Jones completed 14 of 32 passes for 145 yards and threw two picks. They were outgained 428 to 288 in total yards

This offense has been able to get it done with new pieces. Quarterback Mac Jones has passed for 3313 yards with 18 touchdowns and 12 interceptions.

The Patriots offense averages 343.9 yards a game which is 17th in the league. They are scoring 25.9 points per game as they give up 315.5 yards and 17.3 points per game to their opponents. The defense has been the calling card for this team as they are second in the NFL in points allowed at 17.3 per game.

The Jaguars have lost 7 games in a row and are in line for the number 1 pick in the draft.  The Jags kept it close as they lost to the New York Jets 26-21 on Sunday. Trevor Lawrence passed for 280 yards but did not throw a touchdown pass or interception in the loss to the Jets.

This team is behind Rookie QB Trevor Lawrence who has struggled in his first year but has shown promise. Trevor Lawrence has passed for 3225 yards with nine touchdowns and 14 interceptions. Lawrence is also the leading rusher with 301 yards.

The Jaguars offense averages 308 yards a game which is 27th in the league. They are scoring 17.7 points per game as they give up 353.2 yards and 26.4 points per game to their opponents.