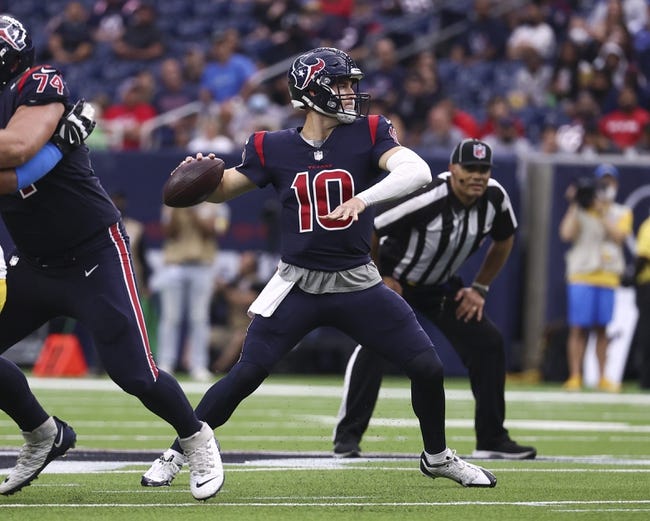 The Houston Texans will travel to play the San Francisco 49ers on Sunday afternoon at Levi’s Stadium.

The Houston Texans are 4-11 this season and have won two games in a row. Houston is coming off of an upset win against the Chargers by a score of 41-29 in their last game. Houston forced three turnovers and scored 24 points in the 4th quarter for the win. Houston is averaging 16.5 points per game and is giving up 26.7 points per game against, while also averaging 192 passing yards per game and 84.8 rushing yards per game. Davis Mills has completed 66.6% of his passes for 2,200 yards, 12 touchdowns, and 9 interceptions for the Texans. Rex Burkhead has rushed for 356 yards and 3 touchdowns, while Brandin Cooks has caught 80 passes for 945 yards and 5 touchdowns for Houston. Houston has scored 71 points in their last two games.

The San Francisco 49ers are 8-7 this season and have won two of their last three games. The 49ers lost to Tennessee by a score of 20-17 in their last game. San Francisco led by 10 points at halftime but gave up 20 points in the second half for the loss. San Francisco is averaging 25.1 points per game and is giving up 22.3 points per game against, while also averaging 244.4 passing yards per game and 123.7 rushing yards per game. Jimmy Garoppolo is dealing with an injury and may not play in this game. If he doesn’t play, Trey Lance would be in line to make the start. Elijah Mitchell (Questionable) has rushed for 759 yards and 5 touchdowns, while Deebo Samuel has rushed for 301 yards and 7 touchdowns. Samuel has also added 70 catches for 1,247 yards and 5 touchdowns for the 49ers.

The Texans come into this game as big underdogs for the second week in a row. Last week, Houston took it to the Chargers for the outright win. San Francisco has some questions at quarterback, but should win the game. There is something about how Houston has played the last two weeks that I think will carry over into this game. I am going with Houston and the points.