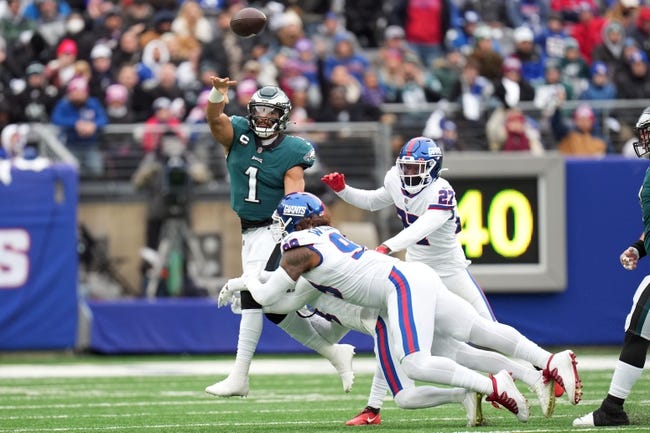 The New York Giants and Philadelphia Eagles face off on Sunday in a Week 16 NFL showdown at Lincoln Financial Field. When these two teams faced off on November 28th it was the Giants that won 13-7.

The Giants come into this game with a 4-10 record overall and they have gone 6-8 overall. In the last game against the Dallas Cowboys, the offense could only manage six points and that led to another loss. New York Is averaging 17 points while their defense is giving up 23.6 points per game. In three of the last four games, the Giants have scored 13 points or less. With Daniel Jones out for the season, it appears the Giants are going to turn to Jake Fromm. In relief, in the last game, Fromm completed six of his 12 passes for 82 yards. Devonte Booker was the top running back in the last game rushing eight times for 74 yards.

On the other side of this matchup is the Philadelphia Eagles who sit with a 7-7 record and they have gone 7-6-1 record overall. The Eagles need to win this game if they want to make the playoffs. In the last game against Washington, the offense was strong scoring 27 points, and that led to the 10 point victory. The Eagles are averaging 76 points while their defense is giving up 22 points. Jalen Hurts is a dual-threat but his running game has been more consistent. In this game, the Eagles need the defense to make life tough on Fromm, or whoever is starting.

The Eagles are no doubt the better team, but this is too many points. Jake Fromm is a breath of fresh air for this Giants team, and he is going to find some success against the Eagles defense. The home team will still win but the Giants will cover the spread.