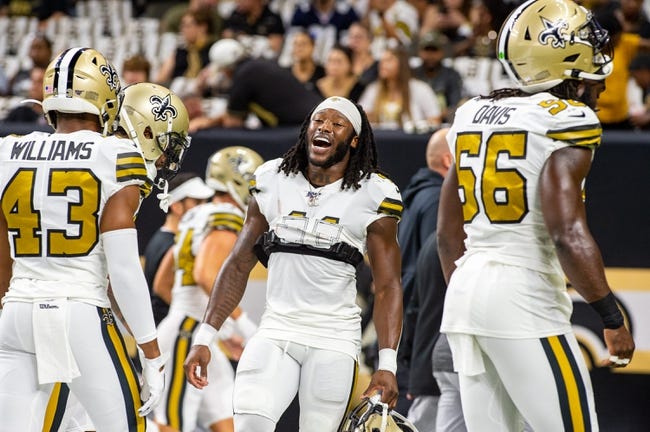 Where to Watch: FOX/NFL Network Stream live sports and exclusive originals on ESPN+. Sign up now!

The Dallas Cowboys will travel to the Caesars Superdome to take on the New Orleans Saints this Thursday night in NFL action.

The Dallas Cowboys lost their 2nd straight game and dropped to 7-4 on the season after being defeated by the Las Vegas Raiders, 36-33, this past Thursday. Dallas was able to force OT on a 45-yard FG by Greg Zuerlein with just :19 seconds left in the 4th quarter, however, the Raiders were able to secure the victory after an 8-play, 67-yard drive in OT set up a 29-yard winning FG by Daniel Carlson with just 4:28 left in OT. Dallas was outgained by Las Vegas by a 509-437 margin and didn’t force a turnover in the loss. Leading the way for the Cowboys was QB Dak Prescott who completed 32 of 47 passes for 375 yards & 2 TD.

The New Orleans Saints lost their 4th straight game and dropped to 5-6 on the season after being defeated by the Buffalo Bills, 31-6, this past Thursday. New Orleans struggled on both ends of the field against Buffalo and could not fight back after Dawson Knox’s 2nd TD catch of the day gave Buffalo a 24-0 lead with 4:19 left in the 3rd quarter. New Orleans won the turnover battle by a 2-1 margin, however, was outgained by Buffalo by a 361-190 margin. Leading the way for New Orleans was QB Trevor Siemian who completed 17 of 29 passes for 163 yards, 1 TD, & 1 INT.

New Orleans has struggled as of late, however, this should be a different New Orleans team that we’ve seen, especially as I expect the Saints to have Hill, Kamara, & Ingram II all available. Dallas is the better team, however, the Cowboys roster has been hit hard with COVID-19 which includes their coaching staff as Mike McCarthy won’t be available to coach this matchup. New Orleans is in a must-win now situation after dropping 4 straight and as I think the Saints have a good shot to win this game outright, I think at worst, New Orleans will cover with the points. Good Luck!