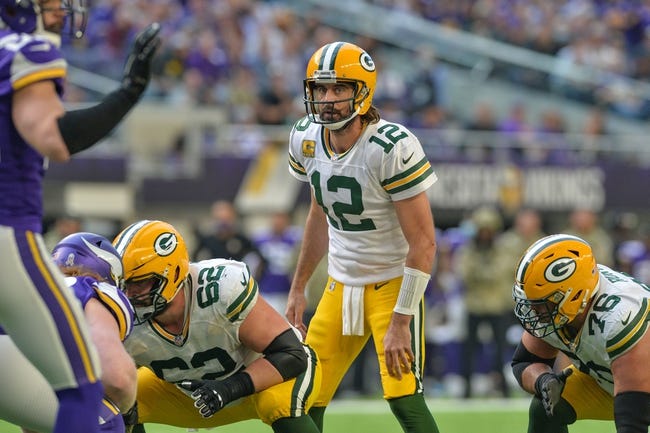 The Los Angeles Rams will travel to Lambeau Field to take on the Green Bay Packers this Sunday afternoon in NFL action.

The Los Angeles Rams lost their 2nd straight game and dropped to 7-3 on the season after being defeated by the San Francisco 49ers, 31-10, on November 16th. Los Angeles had no answers on the offensive end against the San Francisco defense and could not fight back after an 8-yard TD run by Deebo Samuel gave the 49ers a 21-7 lead with 5:24 left in the 2nd quarter. Los Angeles was outgained by San Francisco by a 335-278 margin and lost the turnover battle by a 2-0 margin in the loss. Leading the way for the Rams was Copper Kupp who had 11 receptions for 122 yards.

The Green Bay Packers dropped to 8-3 on the season after being defeated by the Minnesota Vikings, 34-31, this past Sunday. Green Bay was able to tie the game at 31-all with just 2:08 left in the 4th quarter on a 75-yard TD reception by Marquez Valdes-Scantling, however, the defense could not come up with enough stops on the ensuing Minnesota drive and the Vikings were able to secure the victory after Greg Joseph hit a game-winning 29-yard FG as time expired. Green Bay outgained Minnesota by a 467-408 margin and didn’t commit a turnover in the loss. Leading the way for the Packers was Aaron Rodgers who completed 23 of 33 passes for 385 yards & 4 TD.

Los Angeles has arguably the most talented roster in all the NFL, however, it’s been a struggle for the Rams as of late on the offensive end as they have combined for just 26 points over their last two games, and I don’t think the answer for Los Angeles is a road game at Lambeau Field. Green Bay is a bit banged up on the offensive end, however, Aaron Rodgers & Devante Adams is one of the toughest duos to stop in the NFL and as I think the Green Bay defense gives the Rams some trouble, I think the play here is to take Green Bay and the point. Good Luck!